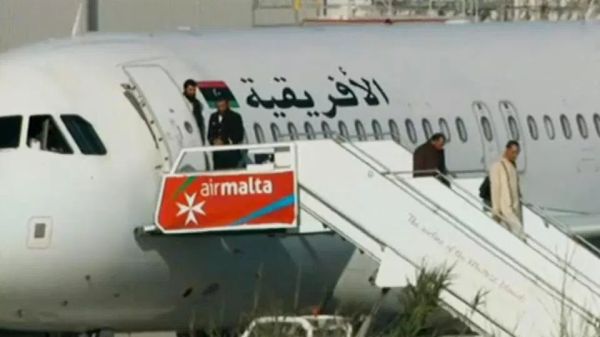 Valletta (Malta), Dec 23 : A Libyan aircraft with 118 people on board, including 82 men, 28 women and an infant, was hijacked on Friday by a man claiming to have a hand grenade. Hours after it landed in Malta a group of 25 people, consisting of women and children, were let off.

The hijacker told the crew he was “pro-Gaddafi” and that he was willing to let all 111 passengers leave the Airbus A320, but not its seven crew, if his demands were met, the Times of Malta said.

Former Libyan leader Muammar Gaddafi was killed in an uprising in 2011, and the country has been racked by factional violence since.

It was unclear what the demands were or whether the hijacker was acting alone.

Muscat earier wrote on Twitter that “The #Afriqiyah flight from #Sabha to #Tripoli has been diverted and has landed in #Malta. Security services coordinating operations.”

He added: “It has been established that #Afriqiyah flight has 111 passengers on board. 82 males, 28 females, 1 infant.”

All passengers aboard the plane were in good health, an unnamed official at the Libyan foreign ministry told the agency.

“(Libyan) Foreign Minister Mohammed Sayala has immediately started intense contacts with his Maltese counterpart and the government there,” the official added.

Security personnel took up positions a few hundred metres from the plane as it stood on the tarmac.

The aircraft’s engines were running 45 minutes after it landed, the Times of Malta said. All other flights at Malta International Airport were cancelled or diverted, it said.

The aircraft had been flying from Sebha in southwest Libya to Tripoli for state-owned Afriqiyah Airways, a route that would usually take a little over two hours.

The tiny Mediterranean island of Malta is about 500 km north of the Libyan coast.

Passengers waiting in the departure lounge near the gates were being moved towards the open area by the Schengen Passport area.

The last major hijack incident in Malta took place in November 23, 1985, when an EgyptAir Boeing 737 plane was diverted to the island nation.

A 24-hour ordeal ended in a bloody massacre with 62 people dead when Egyptian commandos stormed the plane. Only one of the three hijackers survived and was brought to justice.

Forty three years ago then Prime Minster Dom Mintoff managed to negotiate the release of 247 passengers and eight air hostesses on board a Boeing 747 Jumbo Jet, which was also hijacked over Iraq and flown to Malta.

The passengers and air hostesses were released in return for fuel. The plane had been hijacked by Palestinian terrorists. The plane later left Malta and the hijackers eventually surrendered.—IANS