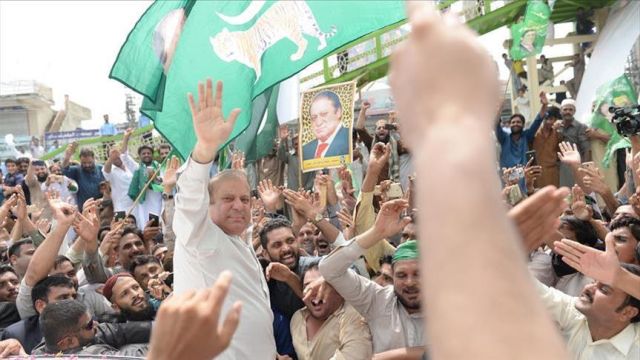 Karachi, Pakistan: A court verdict securing the release of Pakistan’s former Prime Minister Nawaz Sharif, his daughter, and son-in-law has brought some relief to the country’s most influential political dynasty.

But analysts claim that Wednesday’s ruling by the Islamabad High Court suspending jail terms for the trio is not the end of troubled times ahead.

The three-time prime minister still stands trial for two corruption cases. The conviction in the third case has been suspended but not set aside.

Last July, 68-year-old Sharif was disqualified by the Supreme Court over the Panama Papers scandal, which also led to the filing of three corruption cases against him and his family. Not long after, the top court also barred him from holding the leadership of his party.

Subsequently, he was sentenced to 10 years in jail by an accountability court in Islamabad in a corruption case in May.

Maryam Nawaz and Safdar — not co-accused — in the two pending cases against Sharif were sentenced to seven years and one year in jail, respectively.

Speaking about the verdict, Rasheed Rizvi, a former high court judge, said: “This is just a bail granted to Sharif family. The conviction is very much there, which can be upheld or set aside by the high court after hearing the appeal.”

Rizvi, who also formerly headed the Supreme Court Bar Association, added that Sharif would only be considered out of danger if he is acquitted in the two pending corruption cases and the appeal against his conviction in the Avenfield case is granted.

“This will be a lengthy judicial process. Even if he is acquitted in the two cases by the trial court, the government will move to high and supreme courts against his acquittal, which takes a long time,” he maintained.

The country’s anti-corruption watchdog, National Accountability Bureau (NAB), has already announced to challenge the suspension of Sharif’s conviction in the Supreme Court.

Ali Ahmed Kurd, another former head of the Supreme Court Bar Association, does not see Sharif in jail in the near future.

“Suspension of conviction is a huge victory for Sharif on moral, legal and political grounds. The prosecution completely failed to convince the judges because there was no weight in the conviction handed down by the trial court,” Kurd said speaking to Anadolu Agency.

He agreed that the two pending cases against Sharif might turn the table but he does not see any weight in the trial, which is likely to take a month or so to conclude.

“Avenfield case was the strongest case chosen by the establishment [a term used for the country’s powerful military and top bureaucracy] to try Sharif. When this case has failed to convince the judges, then one does not need to be a genius to figure out the potential in the other two cases,” he said.

“It’s hard to predict anything in Pakistan. But I believe there is no longer any need to send Sharif back to jail because the purpose for which the whole exercise was carried out has been served,” Kurd said, echoing a widely-held perception that the former premier was sent to jail to provide an open playing field for incumbent Prime Minister Imran Khan, who his opponents call the blue-eyed boy of the establishment.

Sharif’s release is not likely to bring about a radical change in the current political set up, however it will boost the morale of workers of his Pakistan Muslim League (Nawaz), observers say.

“There will be no change in the political arena as the new government has just been formed. Not only the establishment but Sharif himself would not want to destabilize the current system,” Salman Ghani, a Lahore-based political analyst told Anadolu Agency.

“Sharif’s release would serve as a morale booster for party workers who appeared dismayed for several reasons, including the defeat in the general election,” he said, “and as a result keep a check on Imran Khan’s government.”

Iftikhar Firdous, an Islamabad-based political commentator, said: “A premier who was de-seated, jailed and now released, though temporarily, is quite a significant development keeping the country’s political history in view.”

He was referring to the hanging of the country’s first democratically elected Prime Minister Zulfikar Ali Bhutto in 1977 by then-army chief Gen. Zia-ul-Haq.

“Sharif alone at the moment will not be as powerful without support of other political allies. The real threat to Imran Khan would be when and if he [Sharif] manages to get the major chunk of the opposition parties on his side,” he added.

Firdous added that Maryam Nawaz could lead the party against the new government as Sharif remains embroiled in court cases.

Ghani claimed that he senses a secret role of Saudi Arabia behind Sharif’s release, citing a meeting between the Saudi ambassador and Sharif last week while he was out on parole to attend the funeral of his wife.

Kulsoom Nawaz died after a long battle with cancer in London, while her husband and daughter were jailed in Pakistan.

“I cannot comment on the court judgment but I strongly believe that there was a behind the curtain role of Saudi Arabia in Sharif’s release,” he said.

Information Minister Fawad Chaudhry rejected the perception saying Sharif will not be allowed to leave the country, or be given any favor, in an interview to local broadcaster Geo News.

Riyadh, Islamabad’s longtime ally, has frequently played its role in settling Pakistan’s local disputes. The most significant was a deal brokered by the late Saudi King Abdullah bin Abdel Aziz to secure Sharif’s release in 2001 following dismissal of his government by Musharraf. Sharif later remained in exile in the Kingdom till 2007 in line with the deal.

* Islamuddin Sajid contributed to this story from Islamabad