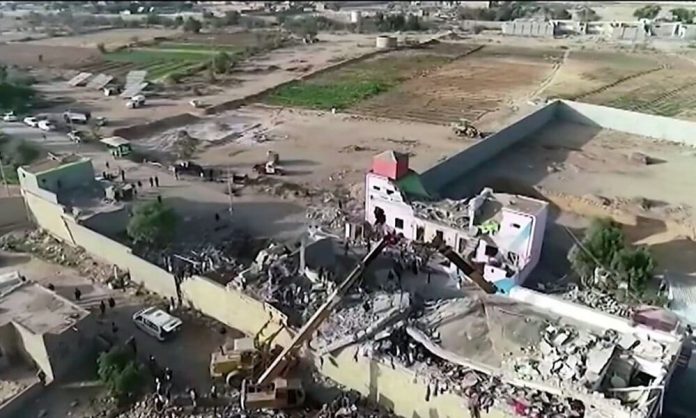 The attacks by Saudi warplanes on two locations, in particular, marked another ugly episode in the seven-year war. Footage shows bystanders searched through rubble with their bare hands to rescue those trapped at a temporary holding facility in the city of Saada and a telecommunications center in the port city of Hodeidah.

The airstrike at the holding facility for migrants killed nearly 90 people and Doctors Without Borders initially said the number of injured was “around 200” but added the true number is feared to be much higher.

At the time of writing, Yemen’s Ministry of Health put the casualties in Saada at 266, including 87 dead, with the process of exhuming the victims still continuing.

Medics say at least six civilians have been killed and 18 others injured in the attack on Hodeidah.

Guterres’s spokesperson, Stephane Dujarric, said further deadly airstrikes had been reported elsewhere in Yemen with children among those killed.

The Yemeni capital Sanaa has also been the scene of another night of heavy airstrikes across the city.

In a statement, Dujarric denounced the airstrike on telecommunications facilities in Hodeidah saying it “has also significantly disrupted vital internet services across much of the country. The Secretary-General calls for prompt, effective and transparent investigations into these incidents to ensure accountability.”

Dujarric added “the Secretary-General reminds all parties that attacks directed against civilians and civilian infrastructure are prohibited by international humanitarian law. He further reminds all parties of their obligations under international humanitarian law to ensure that civilians are protected against the dangers arising from military operations, adhering to the principles of proportionality, distinction, and precaution”

According to Save the Children, at least three children were killed after reportedly playing in a nearby football field when the missiles struck Hodeidah.

The airstrike that damaged a vital telecommunication center in the city that controls Yemen’s internet access, resulted in a nationwide internet blackout.

Aid workers continue to clear the rubble with more casualties including women and children expected to be discovered in both cities.

Save the Children’s Director in Yemen, Gillian Moyes says “Yemen continues to be one of the most dangerous places to be a child today, and children are bearing the brunt of this crisis. They are being killed and maimed, watching as their schools and hospitals are being destroyed, and denied access to basic lifesaving services. They are asking us: does it matter if I die?”

Moyes added that the initial casualties report from Saada is horrifying. Migrants seeking better lives for themselves and their families, Yemeni civilians injured by the dozens, is a picture we never hoped to wake up to in Yemen”.

“While all Save the Children staff are accounted for, the internet outage is expected to reduce our capacity to operate in the coming days if not fixed.”

The humanitarian organization for children says Yemen’s hospitals, schools, water infrastructure, and roads are in disarray after nearly seven years of conflict, further disrupting the lives of children and their families.

The escalation in attacks across Yemen resulted in a 60% increase in civilian casualties in the last three months of 2021, with 2022 already poised to have wider consequences for civilians.

This comes after member states of the UN Human Rights Council voted last year to end the body’s mandate of experts investigating war crimes in Yemen.

The UN mission in Yemen said it is “gravely concerned” about the latest Saudi attacks in Hodeidah noting that “the consequences of continued military confrontation in Hodeidah could be catastrophic for Yemenis, given the importance of the Hodeidah ports, which remain a critical lifeline for the population”.

Yemen is reliant on imports for nearly all its food and fuel; around 90% of which come through Hodeidah’s Red Seaport.

The Norwegian Refugee Council said the strike was “a blatant attack on civilian infrastructure that will also impact our aid delivery”.

The International Committee of the Red Cross said “It is essential that we protect the lives of people in armed conflict. The human toll that we witness in Yemen is unacceptable”

Meanwhile, the Yemeni force’s spokesman Yahya Saree issued a warning to Abu Dhabi saying that “after the massacres committed by the Saudi coalition against our people, we advise foreign companies in the UAE to leave. The UAE is an unsafe state as long as its rulers continue their aggression against our country”.

This comes as Yemen’s Supreme Political Council condemns the “shameful international silence towards the crimes of aggression against the Yemeni people” and warned, “the massacres of the forces of aggression will not go unpunished”.

The Supreme Political Council also warned the Saudi-led coalition “if you think that with your crimes you will subjugate the Yemeni people, then this is out of reach. Despite your crimes, you will fail as before”

It added” the army, committees, and drones are in a position to deter aggression and siege, and they will respond forcefully to all aggressors. You are just murderers and you do not even have the morals of men of war”

The Supreme Political Council also slammed the Saudi-led coalition as “just dirty tools of the Zionists and the Americans. Saudi Arabia and the UAE are more cowardly than confrontation on the battlefields”

The Council further added that “we assure all of our patient and brave people that their steadfastness will yield honor and glory”.

A member of the Political Council of the AnsarAllah Movement Muhammad al-Bakhiti told al-Mayadeen news channel that the goal of the attacks was to terrorize Yemenis.

Lebanon’s Hezbollah stated “we strongly condemn the horrific massacres committed by the Saudi-American aggression on Yemen. This heinous massacre confirms the barbarity of the forces of aggression and their stripping of human, moral and religious values”.

In a statement, Hezbollah also called “on all free people everywhere to stand by the oppressed Yemeni people and condemn and denounce this crime and condemn the forces of aggression”.

The movement added, “we believe that our dear people, who have endured difficulties throughout the past years, are capable of moving towards defeating aggression and achieving victory”.

In the United States, the Congressional Progressive Caucus wrote on social media “this is horrific news, further devastating Yemen. It’s also a predictable consequence of continuing to arm Saudi Arabia. The Biden administration must stop unauthorized participation in the Saudi war and bring its bombings and blockade to an end, as Congress has demanded.”

Trita Parsi, the executive vice president of the Quincy Institute for Responsible Statecraft said “the Biden admin has condemned the [Yemeni retaliatory] actions roughly 13 times since taking office. Not one condemnation of Saudi bombings of Yemen though. Will it also not condemn this attack?”

The author of Reign of Terror, Spencer Ackerman noted “America is complicit in this, as it has been complicit in every Saudi or UAE airstrike of this horrific war that Biden and his senior officials once promised to end. I hope they see these children when they sleep at night.”

Analysts say over the past few years, the equation has changed in the war on Yemen, the era of hit and run appears to be over for the Saudi-led coalition.

Riyadh and Abu Dhabi will now be on high alert with radars fixed on any incoming projectiles from the South.

Unfortunately for both countries, the advanced defense systems purchased from the United States has done little to stop relatively cheap homemade Yemeni armed drones that have proven to be quite effective in causing significant damage. AGENCIES