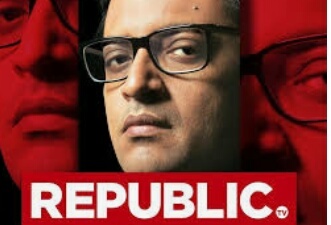 The complaint stated that, “On  April 21, 2020, Republic TV Bharat channel through its Editor-in-Chief Mr. Arnab Goswami conducted a debate in the ‘Puchta Bharat’ show on the Palghar Mob Lynching incident that took place on the night of  April16,2020 at Palghar, Maharashtra while the entire incident was given  a communal colour without any basis.

It further p said that “the Republic TV Bharat has sought to create communal disharmony in the Country when the entire Country is fighting together CoVid-19 pandemic. Both Republic TV Bharat and Republic TV aired similar shows with communal flavor on several other days. These kinds of shows promoting communal attitude were aired on multiple occasions by the erring channels.”

The compliant reminded that these shows were in complete violation with the Programme Code Rules as prescribed under the Cable Television Network Rules, 1994.

The Programme Code specifically states that no programme should be carried in the cable service which “Offends against good taste or decency, Contains criticism of friendly countries, Contains attack on religions or communities or visuals or words contemptuous of religious groups or which promote communal attitudes, Contains anything obscene, defamatory, deliberate, false and suggestive innuendos and half truths, is likely to encourage or incite violence or contains anything against maintenance of law and order or which promote anti-national attitudes, Criticises, maligns or slanders any individual in person or certain groups, segments of social, public and moral life of the country.”

Youth leader also referred the I&B ministry’s latest advisory  issued on February 25,2020 directing  all private satellite TV Channels to be particularly cautious with regard to any content which is likely to encourage or incite violence or contains anything against maintenance of law and order or which promotes anti-national attitude, Contains attack on religions or communities or visuals or words contemptuous of religious groups or which promote communal attitudes, Contains anything defamatory, deliberate, false and suggestive innuendoes and half truths.

It pointed out  that despite, violations being writ evident till date no action whatsoever in terms of Clause 8 of the Uplinking & Downlinking Guidelines or Cable Television Network Regulation Act, 1995 has been taken against Republic TV Channels and Mr. Arnab Goswami by the I&B Ministry.

The youth congress also filed the complaint with Electronic Media Monitoring Centre and News Broadcasters Standards Authority, a self regulatory body formed by the TV channels themselves.

It also dispatched a copy of the complaint the Press Council of India to take appropriate action/or recommend action against Mr. Arnab Goswami for belittling the profession of journalism by acting in “absolute contempt and disregard of all norms and guides of journalistic ethics”.

It is to mention here that the Supreme Court, which showed extraordinary alacrity, has granted Arnab Goswami three weeks protection from any “coercive action” by police in relation to a clutch of FIRs filed against him for inciting hate and criticising Congress President Sonia Gandhi.

Meanwhile the Maharashtra government has filed an application in the Supreme Court on Monday seeking that orders be issued to “insulate” the investigating agency “from any pressure, threat or coercion” from Goswami, so that it can carry out a fair probe. The application said Goswami has ‘used, abused and misused’ his position as editor and ‘publicly tried to malign’ the police.