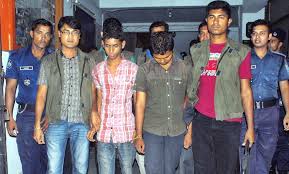 Dhaka, April 10 : Two youths were arrested Wednesday on charges of hurtling religious sentiments amid an escalating row between Islamists and secularists on a new anti-blasphemy law in Bangladesh.

The detention of the youths brought the total number of arrests on charges of blasphemy in the Muslim majority nation of 153 million people to six this month.

“Two youths have been detained for their alleged derogatory remarks made through Facebook against Islam and Hazrat Mohammad,” Sakhawat Hossain, police chief in Sylhet, told Xinhua.

He said communal tension in the Biswanath sub-district of Sylhet, 241 km northeast of Dhaka, eased after the detention of the youths — Partha Das Pappu and Bijoy Chandra.

Personal computers of the detainees were seized, Hossain said, adding the youths were being interrogated by police.

The detention of the youths in Biswanath, approximately 20 km west of Sylhet, came a few days after Prime Minister Sheikh Hasina firmly rejected demands by the Islamists for a new anti-blasphemy law to punish those who speak or write against Islam.

Hasina made clear her Awami League government’s position after hundreds of thousands of Islamists under the banner of Hefajat-e-Islam Saturday demanded a new law that would include death penalty for bloggers who insult Islam and its holy Prophet.

From the rally, Hefajat-e-Islam, a group of non-political Islamic scholars also demanded action against the “atheists and blasphemous bloggers” of Bangladesh’s Shahbag movement.

Since the death of blogger Ahmed Rajib, 35, who along with many others spearheaded Bangladesh’s Shahbag Square movement, a series of blog posts described as anti-Islamic have circulated, although their authorship has remained unclear.

Blogger Ahmed Rajib Haider was hacked to death near his home in Dhaka Feb 15 after he joined a huge protest demanding the execution of leaders of Bangladesh Jamaat-e-Islami party who are on trial for war crimes.

Although the Shahbag protesters have denied the blasphemy allegations brought against them and Haider, the like-minded Islamist parties allegedly backed by Jamaat, a key ally in former prime minister Khaleda Zia’s main opposition alliance, have continued their movement.

Against this backdrop, the Hasina administration March 13 formed a nine-member committee to identify and take action against those making derogatory remarks against Islam and its holy prophet using social media like Facebook and blogs.

Hundreds of Shahbagh protesters Tuesday held a “bamboo stick ” procession, protesting an abortive attack on them after the grand rally of Hafazat-e-Islam.—IANS.