Bhopal, April 17 : The Bharatiya Janata Party (BJP) on Wednesday fielded Sadhvi Pragya Singh Thakur, an accused in the 2008 Malegaon blasts, against senior Congress leader Digvijaya Singh from the Bhopal Lok Sabha constituency, which goes to the polls in the sixth phase on May 12.

The announcement was made hours after Sadhvi Pragya joined the BJP and said that she would “fight aginst those who are conspiring against the nation.”

After joining the party, she said: “I have formally joined the BJP; I will contest the elections and will win. We will fight against those who are conspiring against the nation. We will work together against those people to save our nation.”

According to a report, she met former Madhya Pradesh Chief Minister Shivraj Singh Chouhan and other senior BJP leaders at the party office here on Wednesday.

There was speculation that she may be pitted by the BJP against former Madhya Pradesh Chief Minister Digvijaya Singh, who is the Congress candidate from Bhopal.

Bhopal’s sitting BJP MP Alok Sanjar welcomed the decision and said that the party members would support Sadhvi Pragya and work hard to ensure her victory in the Lok Sabha polls.

Sadhvi Pragya, along with Lt Colonel Prasad Shrikant Purohit, was charged in the Malegaon blasts that killed seven people and injured 80 others in a Muslim locality in Maharashtra in September 2008. She spent nine years in jail in connection with the case and is presently out on bail.

Sadhvi Pragya has always remained in the news for making controversial remarks. She had been associated with the RSS-linked youth outfit Akhil Bhartiya Vidhyarthi Parishad (ABVP) and the ‘Durga Vahini’, the women’s wing of the Vishwa Hindu Parishad (VHP).

At the time of her arrest, Sadhvi Pragya was charged with allegedly planning the Malegaon blasts and providing a two-wheeler that was used to plant a bomb.

Sadhvi Pragya is expected to polarise the Hindu votes besides splitting the Rajput votes in the Bhopal constituency which has nearly 18 lakh voters, including around 4.5 lakh Muslims.

The BJP has been holding this seat since 1989. The Congress had last won the seat in 1984 when K.N. Pradhan defeated Laxminarayan Sharma of the BJP by over 1 lakh votes. 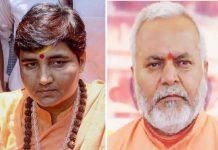 Terror and rape accused are already in  BJP, why Gopal Kanda is untouchable?