The country has seen that PM Modi and his ideological group (RSS) have been missing in action to mitigate sufferings of people devastated by the second wave of covid pandemic. However, it is the civil society groups which did not forget their sense of duty in this hour of grave human crisis. They stepped forward to meet the needs of the moment. What’s the most striking is that many of these groups are run by volunteers belonging to Muslim, Sikh and Christian communities who are often at the receiving end of verbal abuse and violent attack from the Hindutva forces.

Ignoring all these scorns, Muslim, Sikh and Christian groups went from serving food in a war zone to procuring oxygen concentrators and setting up covid-care facilities and field hospitals.  They are in the forefront in battle against Covid. Besides these groups, there are small time good Samaritans who are also leaving a big mark by their act of generosity.

They become a glimmer of hope for those who are in distress. For example, the Medical Service Society (MSS), Human Welfare Trust (HWT) and Human Welfare Foundation have jointly initiated projects to facilitate medical centers and COVID care centers across the country.  Medical Service Society, another partnering organization of “Vision 2026” is offering free COVID care services in various states. Nagpur COVID Centre with 70 bed capacity in Maharashtra has till now successfully treated 630 patients. The Free Telephonic Counselling service run by MSS receives on an average 50 to 60 calls daily and has provided consultation to more than 300 patients.

A O Nasar, director Alshifa Hospital told Muslim Mirror that a 50-bedded Covid Field Hospital was setup at Scholar School in Jamia Nagar Okhla in Delhi which is equipped with 100 oxygen cylinders, 10 oxygen concentrators, nebulization facilities, separate wards for positive patients, men and women without symptoms, nursing staff and regular three course meals for patients. In addition, a 24-hour ambulance service with oxygen facilities is available to transport the critically ill to other Covid hospitals.

Al-Shifa Hospital run by HWT under Vision 2026 is presently having 40 beds exclusively for Covid treatment with ICU and ventilator facilities.

The hospital running since 2011 in Jamia Nagar has also installed a medical oxygen generation plant and construction of liquid medical oxygen (LMO) tank of 10,000 liters capacity at its premises.

Alshifa conducted 1400 COVID tests, vaccinated 2400 people and treated more than 100 COVID patients in April. It also provides ambulance services in the Delhi region for the poor and needy COVID patients.

He said all services at Field Hospital, including treatment and meals, are provided free to all patients and a 30-member medical team consisting of experienced doctors and paramedical staff is looking after the patients.

In response to a question, Nasar said we are not getting any funds from the government but some NGO have agreed to support us as furniture and some equipment are given by Aster volunteers and foods are provided by Leela Palace Hotel.

While a mosque in Bangalore has been turned into a 38-bed Covid Care Centre by its management and opened its portals for treatment for Covid-afflicted patients regardless of religion and caste. The Eidgah Masjid located centrally in 4th Block of Jayanagar, a colony with almost half a million residents.

In Ahmadabad a madrasa has set up a covid center in its premises as Gujarat witnessed total collapse of its health care system exposing the so-called “Gujarat Model”to the whole world.

Another glimmer of hope in the sea of human tragedies is provided by the Sikh community whose members are known for the welfare activities. 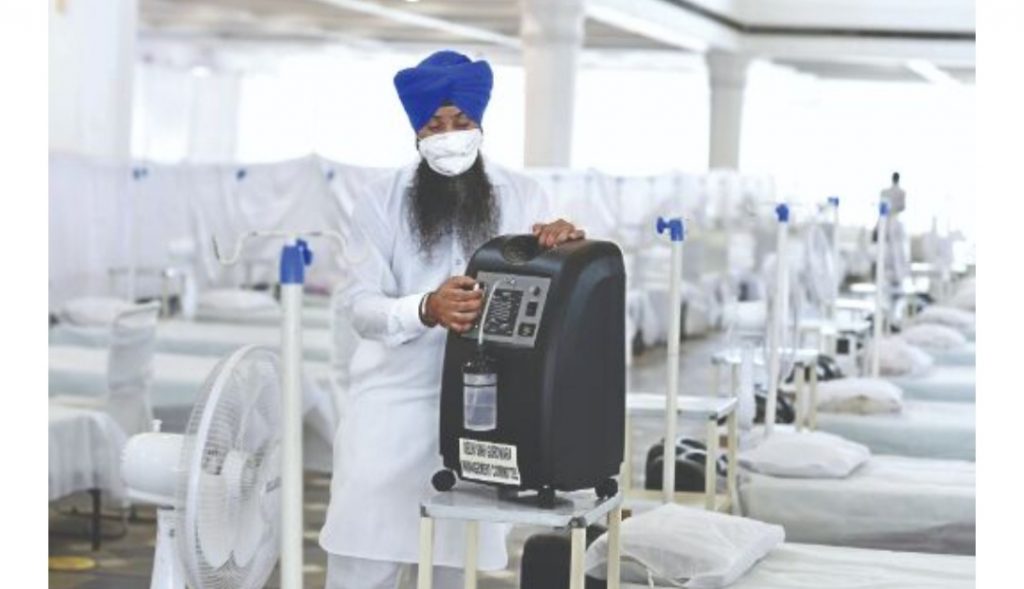 A field hospital was set up at Gurdwara Rakab Ganj Sahib in the national capital which is struggling with shortage of beds and medicines. With a capacity of 250 oxygen beds, and all other services absolutely free of cost, this centre is nothing short of a glimmer of hope that one needs in such times of crisis, when the second wave of Covid is posing serious obstacles to those critical patients who are looking for hospital beds. The facility has been set up by the Delhi Sikh Gurdwara Management Committee (DSGMC), along with the Delhi government. Speaking with Muslim Mirror, Dharminder Singh, General Manager of DSGMC said, “The doctors will be staying here as well, and we’ll be providing every facility ranging from medicines to doctors and nurses. We’ve imported oxygen concentrators from New York and Singapore, and more are lined up for the hospital.”

The 400-bed facility, meant to treat mild and moderate Covid cases admits patients who have oxygen levels of 85 and above which has been seeing a steady stream of patients.

The facility also has a resuscitation room, which functions as an ICU with four beds, Singh said.

Besides this, a host of Sikh NGOs are also playing their part in helping people at various levels.

In the service of distressed people, the Christian community is also not lagging behind which has opened a Covid Care Centre (CCC) with 50 beds.

“What Church (Archdiocese of Delhi) is doing is only by way of small support as a supplement to what is already existing so that the affected and needy people can find someplace where care is given,” Fr. Ajeet Patrick, Coordinator of CCC, told Muslim Mirror.

There is also small time Good Samaritans who made a mark by their act of generosity.

Foremost among them is Nagpur- based billionaire Pyare khan who  has spent around Rs 85lakh so far to help distribute 400 metric tons of medical liquid Oxygen to government hospitals in Nagpur and its neighbouring regions. This came at time when obtaining life-saving oxygen for a Covid- 19 patient proved to be a monumental task .His act of generosity in time of despair and dejection has touched hearts all over the country.

Though the administration offered to pay him back, Khan apparently refused it, adding that he considered this his personal duty or “Zakat” during the holy month of Ramadan.

In Delhi’s Jamia Nagar, 29-year-old social activist Shariq Hussain always remains on his toes as desperate calls for help from affected families have kept his phone ringing. He has been providing free oxygen cylinders to Covid-19 patients ever since cases in the city spiralled out of control.

Instead of providing relief to the people, the government and the ruling party members have been busy in protecting the “image” of the PM which took a severe beating because of his failure to protect people from the pandemic wave.

It’s the ordinary people who are really struggling and not the politicians and the far-right groups who incite the hate are not the ones who are struggling.

As senior journalist Rohini Singh puts it,”The Sikhs who were being called anti national and Khalistan sympathizers till two months back, have become saviors of life.

With funds at their disposal and contribution from Sikh community both in India and abroad they were the first ones to get oxygen concentrators to India even before the government”.

“No matter how hard the government tries to divide people on religious and communal lines, this pandemic has proved that people have stood with each other in the time of this national crisis,” she told Muslim Mirror.  Gurdwara, mosques and churches and institutions affiliated to them have come forward in the times of need, she underlined.

Media analyst Quamar Ashraf also recalled “The Muslims managed to overcome the damage media inflicted upon the entire community by scapegoating Tablighi Jamaat last year, thanks to social media. For obvious reasons, the television media won’t have eggs on their face. But it is reality, that you will not find any frame bereft of skull-cap men extending help to the needy at hospitals or crematoriums,”

He further said that whatever appeared in press and social media platforms is only a “tip of an iceberg” as religious organisations rarely go in public for the charitable works since most of them abide by the dictum “a man’s left hand should not know what his right hand gives”.

“You know people have always appreciated welfare works done by the Muslim community in crisis. Remember their service during the reverse migration following the abrupt announcement of nationwide lockdown last year…This time again a plethora of organizations and individuals came forward. Several mosques, Muslim-managed facilities such as schools and community centres were converted into Covid ward across the country. Not only Muslims, the Sikh community has also done a marvellous job,” he told Muslim Mirror.

The  people will not forget the desperate scenes on television screens and social media platforms with cries for help but PM Modi and his  government  have been found wanting. Be it the centre or the state both are completely missing from action, as Rohini Singh points out, Delhi has 272 municipal counselors, 70 mlas and 7 MPs. But all were missing from action. People were left to hunt for beds, medicines and oxygen all by themselves.

On the other hand, the crisis has shown us the reality of what we are, as Prof Abhinav Prakash Singh said in his article in an English daily, that “we are a third world country with delusions of being a vishva guru and becoming a great power when we do not have oxygen plants even in large hospitals, as oxygen supplier lobbies subvert the decision making process”.