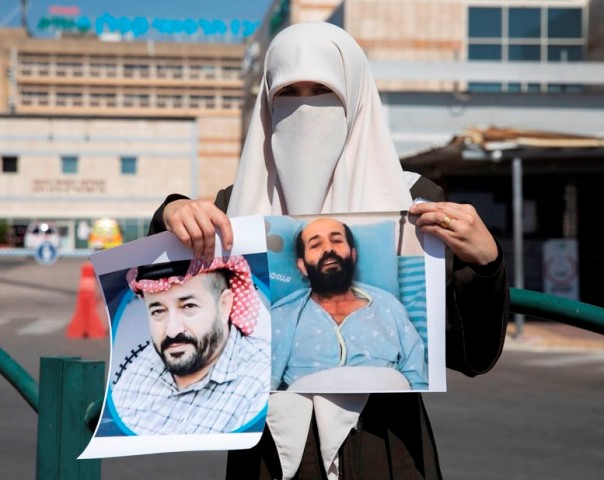 Wife of Palestinian detainee Maher Al-Akhras has joined him 4 days ago, with Maher on 76th day of his hunger strike

Joining her husband Maher Al-Akhras in his hunger strike against Israel’s “administrative detention,” Taghreed Al-Akhras has continued her protest on the fourth day.

“He is refusing to take any vitamins or supplements. He decided either he would be released or die,” Taghreed Al-Akhras told Anadolu Agency.

Her husband has been on an open-ended hunger strike for 76 days after he was arrested in late July and placed under “administrative detention”.

Maher continues his detention in the Kaplan Hospital near the Israeli capital Tel Aviv after his health has deteriorated.

He has been suffering from severe pains on the head and stomach, pressure on the ears, and cramps on his chest, according to his wife.

The woman who is on a sit-in protest at the hospital expressed her concerns about her husband’s life who is in critical condition.

“The doctors avoid checking him. They just enter the room and told him that they cannot check him because he is refusing any supplements. They told him that he will die anytime and he himself is responsible for what happens to him,” Taghreed said.

The doctors still refuse to give any detailed report about his medical condition to be submitted to the court, she added.

The wife said that the Red Cross has not visited her husband until now despite many appeals by the family to visit him and put effort for his release.

“We appealed to the Palestinian government and international NGOs, nobody has come, though.”

The family of the inmate Al-Akhras lives hard times in the absence of their parents.

The six-year-old Tuqa, the youngest daughter, feels sadness and is worried about her father’s life.

She used to be picked up from the school by her father who is between life and death now.

The young child remains on alert all the time, following the news coming from the hospital instead of having fun times as a child.

“Just try to imagine how her life goes on, she is missing her dad, feeling afraid all the time. When she sees her father’s picture on the TV, she gets afraid of losing her father, but who cares!” said Bassam Diab, Maher’s son-in-law who takes care of the family nowadays.

Around her 70s, Maher’s mother has big concerns about her son’s health. The family members expressed their worries about the elderly women who suffers from many chronic diseases and her health condition becomes worse day after day.

“The family’s worries become more with the time passing without Maher being released. If we hear the telephone ringing, we suppose the caller will tell us that he has died,” Bassam told Anadolu Agency.

Maher was arrested five times previously. Israel’s Shin Bet security agency said that they have information which says Al-Akhras has an activity in the Islamic Jihad Movement.

Under Israel’s administrative detention policy, prisoners can be held more than one year without charge or trial.