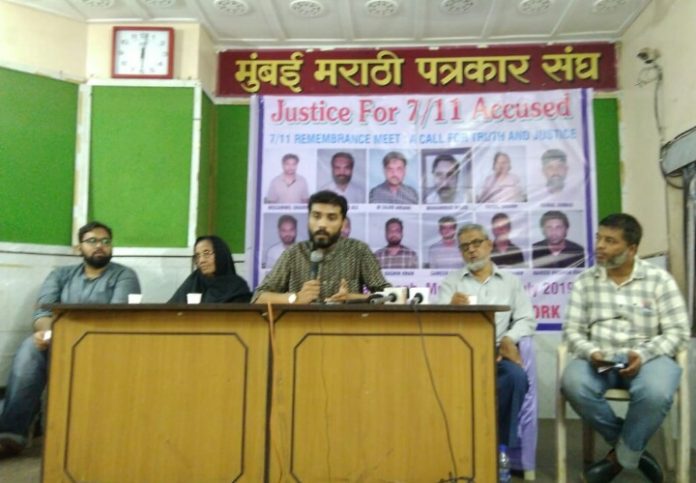 Mumbai : Innocence Network India organised a remembrance meeting of victims of the 7/11 train blasts case in 2006 at Marathi Patrakar Sangh, CST, Mumbai on Thursday. The blasts caused loss of more than 180 lives and left Mumbai tattered.

In the meeting, the call for justice and truth for the families of 13 accused who have been wrongfully prosecuted in the case by the ATS was also reiterated.

Mrs. Shaheedunnisa, mother of Kamal Ahmed, addressed the press conference stated how his innocent son was picked up from their house in Madhubani Bihar at night. Since past 13 years, due to Kamal’s incarceration his five children are living a destitute life. Kamal’s mother said that ‘she travelled from far off places to the prisons but she was not even allowed to meet her son in nagpur prison’. I hope that the Indian government and Bombay High Court will do justice to her son, and at least treat him like a human being. . My son Kamal’s both eyes are almost blind as effect of the physical torture and mental trauma”.

Social Activist Khalid Siddiqui brought attention to the conditions of the families suffering from past 13 years due to incarceration of their sons in such a high profile case. It is not just 13 men but 13 families who are suffering- all of them are suffering from diseases and have severe mental and social trauma that will take years to overcome.

Mumtaz Mir, social activist and writer from Burhanpur, Madhya Pradesh, narrated how his ordeal of 25 years to get acquittal in a TADA case. He shared how a community meeting organised to plan protest against an incident of parading a Muslim man by tying him on the bonnet of a police car, led to fabrication of this case. Mr. Mir and his co accused suffered torture in police as well as judicial custody.

Sharib Ali, Founder Members of Innocence Network, stressed how MCOCA law should not even have been applicable in this case, as UAPA was already applied. But in this case since the beginning the standards of evidence and investigation procedures were changed- confessions was allowed under MCOCA, forensics was misused, and the investigative agencies are holding two different sets of accused for the same crime.. MCOCA was applied only so that confession given to police, an evidence which is not acceptable in any law framework in India, could be presented as evidence. Mr. Ali agreed to the mood of the hall that the fight to get justice for the 12 wrongly convicted men in this case is a painful and tough fight. And that this loss caused by wrongful prosecution will be very difficult to ever compensate by the state. But in these many years, we will have to keep sharing the struggle and strengthen each other.

Fawaz Shaheen, National Secretary of SIO and a Sr. Researcher with Quill Foundation, pointed out that it is not new that young men from a particular community are implicated and the whole community is targeted. He expressed ‘how ATS circulated press clippings about ‘forensics approved’ call records data and narco analysis tests were used to sensationalise media narrative and to propagate stories that these accused were in touch with the LeT. These claims also helped ATS to get prolonged remand of these accused which they used to torture and extract fabricated confessions. These call records and narco analysis was not even presented in the court as evidence. Infact, when all the accused pleaded that these call records can prove their innocence ATS reported in the court that they never had such records with them. Similarly narco analysis tests were also sensationalized despite the supreme court pointing out that these tests are not legally acceptable as evidence.

This is a pattern in various cases of terrorism where certain ‘evidence’ is sensationalized in the media to satisfy public conscious, which also help the agencies to get extended police custody which they use to torture and pressurize accused to sign on fabricated confessional statements.

Wahid Shaikh, a human rights defender, who was acquitted in the case four years back, is being continuously harassed and pressurized to ‘visit police station’ without any due cause.. Over the last one week, the police has visited his house several times, and caused harassment to his family in his absence. Wahid Sheikh’s harassment by the police because of his human rights activity has been reported to the National Human rights commission of India.

The families of 12 wrongly convicted, and of Wahid Shaikh who was acquitted after 9 years of incarceration, have suffered unspeakable pain since the blasts. Their loss is no less than the grief of those who lost their loved ones in the blasts.