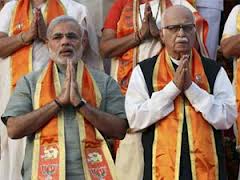 Bangalore, April 7 : Karnataka’s ruling BJP formally launches its campaign for the May 5 assembly poll with a rally here Monday but, contrary to announcements, senior party leader L.K. Advani and Gujarat Chief Minister Narendra Modi are giving it a miss.

The Bharatiya Janata Party has not given a reason for the two not attending the rally, which the state leaders have been projecting as one that “will show the party’s strength”.

Though state party leaders had been saying for days that Advani and Modi would also address the rally, their names were missing from the list of speakers announced Friday in New Delhi by party general secretary and Bangalore South Lok Sabha H.N. Ananth Kumar.

Incidentally, Modi had also missed the first meeting of the recently re-constituted BJP parliamentary board in New Delhi Friday at which the first list of 140 candidates for the Karnataka poll was approved.

Modi has returned to the board after a gap six years.

The two misses by Modi are giving rise to speculation in political circles, including in the BJP, that he appears reluctant to closely associate with the campaign in Karnataka as the party is in a shambles due to corruption scandals, dissidence and desertions.

Strengthening the speculation was Chief Minister Jagadish Shettar’s announcement Saturday that Modi would campaign in five districts, whereas Karnataka has 30 districts.

Shettar did not identify the districts nor did he give the number of meetings Modi would address in the five districts.

With Modi leading the BJP to victory for the third time in the Gujarat assembly polls and a section in the party projecting him as the party’s prime ministerial candidate, the Karnataka unit was hoping for an extensive campaign by him.

Modi had campaigned for the party in the 2008 assembly polls. Though the party did manage to come to power after the polls, Modi’s campaign did not seem to have had any major impact.

The party continues to lose legislators and ministers to the Karnataka Janata Party formed by its former leader B.S. Yeddyurappa.

On Saturday three legislators, including Tourism Minister Anand Singh, quit the party. Anand Singh and another legislator, Suresh Babu, are from Bellary district in north Karnataka.

At least one more legislator from Bellary, G. Somashekara Reddy, brother of jailed mining baron G. Janardhana Reddy, is expected to quit the party soon to join a new outfit floated by Reddy loyalist and former BJP minister B. Sriramulu.

The party has, however, managed to retain two ministers who are self-proclaimed Yeddyurappa loyalists.

The two, Housing Minister V. Somanna and Industries Minister Murugesh Nirani, added some drama to the still dull campaign scene earlier this week by publicly shedding tears that they were sorry for not joining Yeddyurappa. Both will contest the poll on the BJP ticket.

Elections are to be held for 224 seats of the 225-member assembly. One member is nominated. Nominations open April 10 and close April 17. Vote count is on May 8.—IANS.