Varanasi, 21 Nov: After two weeks of protest by ABVP (the RSS affiliated students wing) against the appointment Firoz Khan, a Muslim professor in the Sanskrit Vidya Dharma Vigyan in the Banaras Hindu University (BHU) hundreds of students on Wednesday evening came out in his support.

The students under the banner of the Joint Action Committee, BHU, led a solidarity march in the campus of  Banaras Hindu University holding the  banners and placards declaring their support for Firoz Khan.

“We are with you,” and “Language has no  religion,” read some banners at the rally in support of Mr. Khan, held from the Lanka gate to the Ravidas Gate near the central varsity campus.

The BHU administration continues to maintain that the appointment of professor Feroz Khan is in accordance with the prescribed norms and there is no question of his removal.

The BHU administration has issued a statement, saying, “The idea behind the establishment of the university was to contribute in nation-building by providing equal opportunity of study and teaching to all deserving people without any discrimination on the basis of caste, religion, gender and sect.”

The statement also said that Khan”s appointment was a unanimous decision made by a selection committee under a transparent process.

The Muslim professor Feroz Kahn, meanwhile, said that he felt ”insulted” by the incident and added that he would have never applied for the job if the university had mentioned in the advertisement that they did not want a Muslim. 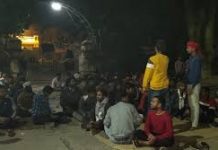 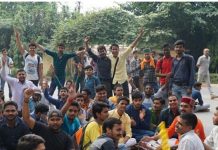