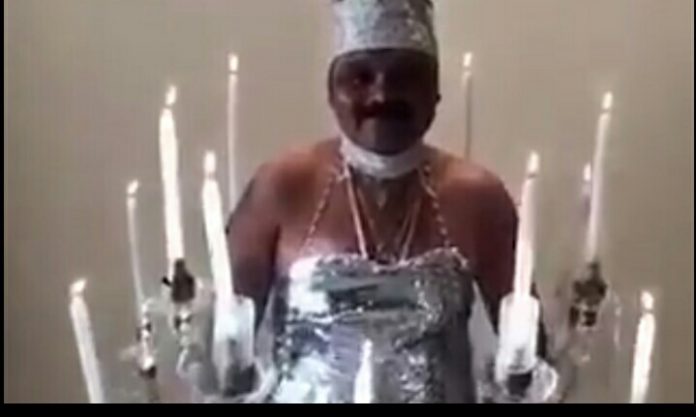 At the stroke of 9 PM on Sunday April 5, 2020, the entire country headed to the Prime Minster Narander Modi’s call to switch off lights for nine minutes and then light candle. They all did, even those in one-room huts with just a small bulb. This has made some pessimists with a wit of humor to comment, ‘if you elect a clown, circus is obvious.

Whatever maybe the outcome in the battle against Corona the Prime Minister has been successful to co-opt everyone in this moment of crisis and this was reflected in light festival with crackers and fireworks witnessed on April 5, 2020.

The fact remains that people are ready to obey the commander in chief; even many know it’s something bizarre. They are blindly doing so as they are convinced that the Prime Minister would win the war against Corona virus and in such moment of crisis they must show national solidarity, no matter even if someone calls it a circus.

The similarity between the two is quite a few. Both established a powerful connection with the masses and the masses were willing to obey their leader. Both the Prime Ministers had shown huge drive towards personalization and centralization of power. Who scores over the other is personal likes and dislikes of the two leaders. The other similarity is both the leaders made their own decisions and headed no one’s advice-council of ministers or the PMO experts etc.

While Indira Gandhi connected with the masses on poverty eradication plank and every one believed her that she is going to make countrymen get rid of their  hunger and starvation, similarly, everyone believes Narander Modi connects with the masses with his cult image as a Hindu icon, that will turn India into Ram Rajya.

Modi is India- India is Modi comes out vividly when Prime Minster Modi gave three days’ notice on March 19, when he announced Janta curfew for March 22.

The time was 7 AM to 9 PM and he gave 5 minute break time exactly at 5 PM for the people to come out and do hand clapping and beat vessel to shoo the virus. People obeyed him and got into joys mood and chanted ‘go corona go.’  This was one man’s decision and people obeyed his command without any opposition.

In this circus like activity, the narrative that was built was the act of cheer was an ode to the Corona workers fighting the virus. However, no one asked the question why at 5 PM alone and why not at any other time of the day. None asked the need of such circus when the fight against virus had just begun? Even no one questioned the narrative to be a smoke screen for Hindu superstitions that Corona can be shooed by collective noise. That is the aura of the Prime Minister.

Once again Prime Minister Modi comes on the TV on March 24 at 9 PM to announce the 21 days complete lock down in the country till April 14 with just four hour notice. The country men complied to his orders even though, it came as a shock to them as many of them were unprepared and bid time to get them organized.

Even though there were cat calls why the Prime Minister did not announced the lock down on March 19 when he was asking to obey Janata Curfew on March 22. Why he took three days’ time?  What preparation did the government made in the interim period of March 19 to 24 before he announced lock down? Even with all such doubts people did not defy the orders of the Prime Minister.

Then what happened was human fall out of the lock down as a large number people were to be faced with untold hardship. People forgot about the government’s preparedness to fight the virus and focus shifted to human tragedy that we all watched on the TV like a reality show.

Now no one talked about community testing, inadequate supply of drugs and equipment to those in the frontline to fight the pandemic as the entire attention shifted to the plight of the poor who had become victims of the lockdown. The fight against virus now turned towards poor people’s suffering and the government looked for cover to defend its decision of lockdown.

What started as a fight against the Corona virus shifted to government’s apathy to address people’s hunger and starvation cries? At a time when the government seems to be in the dock, the Tabligi Jamat episode surfaced. People forgot about the plight of the people walking miles without food water towards their homes and a vilification campaign was built against the Muslim community. Now Corona had don Islamic colors. And to get rid of the Muslims was a remedy to win the war against the unseen enemy. The human tragedy that unfolded and communalization of the society that followed, took away all the seriousness with which the fight against the virus was going on.

Even as all these things were happening, no one noticed something unique. The Union government usurped the powers of the states under the central legislation called the Disaster Management Act of 2005 to announce nationwide lockdown.

As per the Constitution, both law and order and health subjects are under the preview of state governments and any such announcement could have been done only by the state governments.  But in this case the central government over ruled the state powers and declared lock down even without declaring a constitutional emergency in the country. This is something unprecedented in India.

But then, the Prime Minister has his own typical style of functioning. He has little regard for constitutional democracy, the rule of law, the advice of the council of ministers or his own advisors at the PMO.  He goes by the adage “Na Khata na bahe, jo Modi kahe wahi sahee” ( No ledger no log books – whatever Modi says is law).

Now coming back to the lighting of the candles on April 5, 2020, why the PM asked the people to add to the darkness first by switching off the lights and then ask then asking them to dispel light by lighting the candles/diyas. What is the relationship of such symbolism with the fight against the Corona virus?

No one went into such deep thinking and they responded to Prime Minister call by lighting the candle. None questioned Mr Modi’s wisdom this time again as they did some time ago when the demonetization was announced and people had to undergo untold hardship in its wake. This was because people had faith that the Prime Minister will turn around their sufferings and bring ‘Ache Din’ (better days) in the country.

Even after knowing well to have been deceived earlier, the people again has re-imposing their faith in the Prime Minister and lit the candle hoping that he will lead the country to victory  against the unseen enemy. The question is will he do so or will he con again?

The fight against Corona virus is totally different from the           Prime Minister’s earlier decisions like; the surgical strikes, demonetization, GST etc. It’s a global pandemic that needs preparedness in the health facilities at a massive scale.

However, government strategy is to have rudimentary medical facilities at the hospitals and to treat only the full blown up cases. There is no emphasis on testing the impact of virus in each person which is the key to the containment of Covid.

The government is hoping that the lock down will break the chain of the virus and it will die its own death. There is some cynicism in such thinking as there are many grey areas in such battle plan.  Will the government save the people from the impending catastrophe with such battle plan is open to discussion.

The other discussion is how to give relief to the poor and the marginalized segment of the society who has borne the brunt of the lock down in the country. Equally important is the way the communal virus has fang out in the country while fighting the war against the Covid-19. The total indifference of the government in containment in all such issues suggests the government’s lack of seriousness in handling this novel epidemic.

Now if we analyze the call by made the PM to make sound and noise first and then light candle it reflects on the country’s commitment to fight the Corona virus. The optimists pin lots of hope on the Prime Minister’s approach to fight pandemics some pessimists call it, ‘if you elect a clown, circus is obvious.