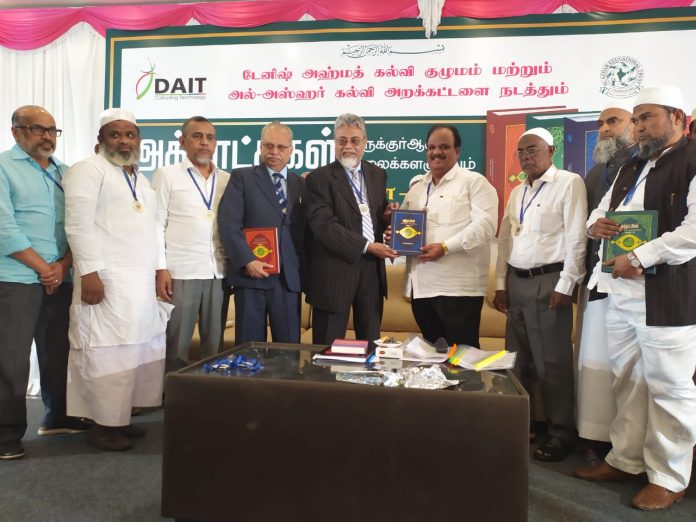 In his address, he said that the author took painstaking effort to collect plethora of interesting info relating to Holy Quran at different universities across the globe and his book proves to show his indepth research and study by the author and added that the book is must read by everyone irrespective of any religious barrier. Former Madras High Court judge K N Basha expressed his happiness in taking part at the book release function and went on to say that its an outstanding work by Ameer Althaf. And he said that he was awestruck after  browsing thru’ the pages of Athaatchigal as it contained some rare pictures. Additional District and Sessions Judge A Mohamed Ziyavudeen who received the first copy said that the book is a treasure trove, a must in every household.

Earlier, Dr Ameer Althaf in his welcome address recalled his three decade long intensive research of Holy Quran during his forty year government career. Quite Interestingly, he has been identified as one of the Holy Quran researcher at global level.  He went on to say that it took nearly seven years for bringing out this four part series ‘Athaatchigal’. He disclosed that he is working seriously on yet another 30,000 pages book titled ‘Al Quranin Mozhiyil Arputham which he said that 90 percent work is over.  Moulavi Alhaj M M Kamaludeen Imdhadhi, faculty at Podanur Markazul Hidaya recited verses from Holy Quran to commence the event.