Known as Hitler’s priestess, Savitri Devi or Maximiani Portas has remained an influential figure after her death in 1982 among the Hindutva groups in India and abroad such as RSS, the Vishva Hindu  Parishad, and Bajrang Dal as well the Hindu Swayam Sewak Sangh in the USA and Canada.  She was an admirer of Hitler and an ardent proponent of Nazis and advocated a synthesis of Hinduism and Hitlerism. Born in 1905 in France to English-Greek parents, she became a leading member of the Nazi underground group. She proclaimed Hitler as an avatar of the Hindu deity Vishnu and Jews as evil.  She worked at the Hindu Mission in Calcutta for 18 months and shared V.D. Savarkar’s concept of Hindutva. She devoted her life to reviving, exiting, and cultivating Hinduism throughout India with the support of Hindu fascists.

Her book A Warning to the Hindus is Devi is an attempt to alert Hindus to the threat of  Islam and Christianity. Like most Hindu fascists, she believed in the supremacy of Hindu upper castes.  She advised them to be assertive if they wanted to avoid the fate of pagan Greece. She saw Hindu upper-castes as symbols of Arayan purity and superiority.

In the concluding chapter of the book, she envisioned an India that would revive Arayan supremacy in the world. She wrote: “And there would be nothing astonishing if such Hindus, enjoying complete independence, become conquerors, and rebuild Greater India. There would be nothing extraordinary even if, through them, one day (through their direct or indirect influence), the dream of the resurrection of Aryan Pagandom in the West also, which now seems impossible, becomes a reality.

Nobody knows what can happen, what might happen. And all hopes are natural to a young nation if it is secure.”

She asked Hindus to militarize them and to ensure that the population of Muslims does not grow. She advocated systematic and organized violence against Muslims to intimidate and make them feel insecure in India.

She suggested four cardinal points that every Hindu should espouse.

The creation of a Hindu Rashtra should be the objective of every Hindu. They must accept upper castes as representatives of pure Arayan ancestry and take their leadership. Defense of the Hindu interests defined by the upper-castes is the duty of every Hindu. Upper-caste domination should facilitate the power of Aryans in the world.

The militarization of Hindutva groups in India and abroad is part of the Savitri scheme.

Savitri Devi worked tirelessly to bring Neo-Nazis and White supremacists closer to Hindu fascist groups such as the RSS and Vishwa Hindu Parishad. Many Hindu fascists have succeeded in infiltrating academic institutions, financial conglomerates, political parties, and business houses through secretive connections in Canada, Europe, and the Americas. Trump’s relations with Modi have highlighted the closer ties between white supremacist Ne Nazi groups and Hindu fascists’ roots in white supremacy and Neo-Nazism. 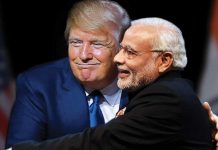 The RSS and white supremacist nexus