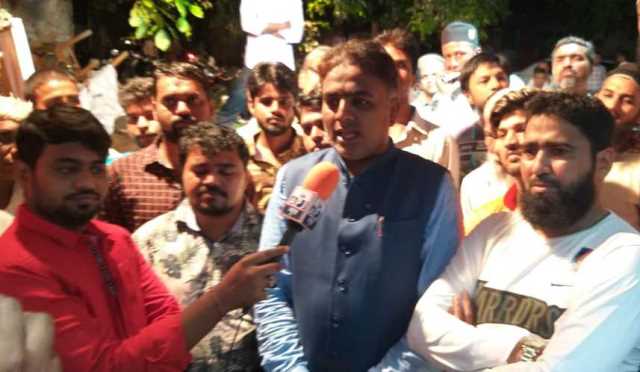 Aamir Edresy a software engineer by qualification, businessman by profession and a social activist by passion is  contesting the elections as a Vanchit Bahujan Aghadi (VBA) candidate from 179 Sion-Koliwada Constituency.

Edresy is founder and national president of Association of Muslim Professionals (AMP) an  NGO which  helped to place thousands of  youngsters in various corporates all over the country. Excerpts from an interview with Muslim Mirror

You have been very active in Wadala & Sion Koliwada, Mumbai in last few months. What has happened that you have thought of contesting elections?

Aamir Edresy: I’m thankful that you have noticed my work and the activities of my team at Wadala & Sion Koliwada. As you know parts of Antop Hill and Wadala (E) are quite undeveloped and there’s a lack of basic facilities like good roads, hygienic toilets, parks & gardens, as well as lack of good schools and colleges. Due to this there is an unhealthy environment and people are caught up in undesirable activities like Drugs & other anti-social activities.

Yes, I’m contesting elections from this Constituency, so I can help bring in a positive change here, Godwilling.

You are running several organizations and doing wonderful work all over India. Why this sudden interest in Politics and Elections?

Aamir Edresy: Yes, by Lord’s grace have been trying to  evolve the Indian Muslim community into an Intellectually Progressive, Socially Dynamic and Economically Potent community of conscientious individuals who will significantly contribute to the development of the Nation.

Towards this, I have been meeting with a lot of individuals and social leaders all over the country. With these interactions, I have realised that to accelerate this work and reach out to more and more people, getting into the Legislature will give me access to the State machinery which can aid the Developmental work that me and my team has been trying to achieve.

Why have you chosen Vanchit Bahujan Aghadi?

Aamir Edresy:  Upon analysing the current Political situation and considering all Parties, I choose Vanchit Bahujan Aghadi (VBA) which is a strong Dalit outfit of  Prakash Ambedkar in alliance with AIMIM. It looks to be a good Political combination with representation from the 2 most oppressed classes of the Country today.

VBA has tied up with AIMIM which is considered as a Communal Party or some say as an ‘Agent’ of BJP?

Aamir Edresy: Well AIMIM is as communal as Shiv Sena or the BJP and if it is fine for them to represent and work for the interest of Hindus then what is the problem if AIMIM wants to represent Muslims and has their interests in mind.

As regards to being an ‘Agent of BJP’, it’s a canard spread by some secular parties. Since AIMIM appeals to Muslim voters and they vote for the party, the other parties who lose these votes, term AIMIM as ‘Agent of BJP’ because in some cases the split of Muslim votes might be helping the BJP.

Didn’t you approach Congress or other secular parties, which are favoured by Muslims?

Aamir Edresy: Well Congress has its own brand of politics which is neither here nor there. Today, Congress is facing an identity crisis and their leaders are more interested in promoting their own people rather than allowing a talented outsider to contest elections on their ticket. Hence the decision to approach VBA which I feel is very relevant for the interests of Muslims in current political scenario.

Why have you chosen to represent Sion Koliwada constituency? Why should the electorate vote you and not the sitting MLA.

Aamir Edresy: A few of my friends and acquaintances from this constituency approached me to help change the living conditions here. After visiting and looking at the prevailing civic scenario, I decided that there is lots to be done here and the best way to do the Change was to become a part of the legislature and administration. And hence I decided to contest elections from here.

Looking at the dismal conditions of the Constituency and the people here, am sure the electorate will definitely vote for someone who can bring in a positive change and improve people’s lives and not just be an MLA for the name’s sake. In any case the sitting MLA, Mr. Tamil Selvan was voted as one of the ‘Worst Performing’ MLAs of Mumbai in a survey carried out recently.

What will be your plan of action or your ‘Manifesto’ if you get elected?

Aamir Edresy:  I’m very focussed on what is needed for this constituency;

        First and foremost, we need to improve the Civic services and facilities in the slums especially.

         Secondly, we need to focus on better health and hygiene by building parks and sports facilities so the youth are weaned away from Drugs and other anti-social activities.

         I would also like rope in Skill Training centres in this area as a large population of children drop out from schools and colleges due to their poor economic conditions. At least after their skill training they can get decent means of livelihood.

         More municipal dispensaries and a decent municipal Hospital is the need of the hour. The nearest hospitals are the Sion Hospital and KEM Hospital, which are a good half an hour to one-hour way and can be far in critical times.

         Mohalla Committees would be formed. People to people contact would be increased to remove the Communal poison taking root everywhere and I would involve people from different caste, creeds and political parties in each other’s social and religious functions.

         The upper class population from the high-rises would be invited to contribute in the lives of their underprivileged brothers and sisters from the slums. The idea is to develop an eco-system which takes care of its own population without the need to be overly dependent on outside intervention and funds.

A political manifesto will be duly released in the due course of time.

What happens to your Professional career and the NGO that you have been running after you get elected?

Aamir Edresy: Well, I gave up my professional career a few years ago when I decided to concentrate my efforts on Community development. However, I do have a few business projects that I run along with my partner-friends, which would continue.

As regards to the NGO that I run, I have created the next rung of leaders who can easily run the day to day operations and achieve its Mission and Vision. I will continue to lead and guide, but may not be able to give the amount I used to until now.

Where do you see yourself 5 years from now?

Aamir Edresy: After developing the constituency in 5 years God willing, I would be setting up my vision higher by graduating to National politics. Would similarly identify a parliamentary constituency where I can make a difference and use my legislative experience at a bigger and higher level so that I can be an instrument of Change that we all want to see.

What is your opinion on the BJP government at the State & Centre?

Aamir Edresy: Although BJP came into power on the Congress anti-incumbency wave at the Centre, since then it has polarised the voters to hold on to that power. Through social media and other platforms, they have been spreading poison in the minds of Hindu voters against the Muslims and Dalits so that they can have the upper caste voters on their side. Instead of working on Development as per their slogan ‘Sabka Saath, Sabka Vikas’,  they have busy working to further polarise the voters through the ‘Triple Talaq Bill’ and ‘Abrogation of Article 370 in Kashmir’. The economy is in tatters after the Demonetisation and the ill-conceived GST slabs.

The State Government is the B-Team which has been supporting the same agenda and there is no visible change in the 5 years that they have been at the helm.

What is your special message to the voters of your constituency?

Aamir Edresy: Do not lose hope, you have a right to honourable and decent living as enshrined in the Constitution and you shall achieve it with Aamir!

Dream, Dare and Achieve with Aamir!