The Modi government’s Kashmir policy since August 5, 2019 has triggered several struggles at several levels against India.  The first is by the people of Kashmir who got a fillip to struggle against India from the position of despair and alienation.

The second, it has ignited a struggle in Pakistan to take on India head on its fascist policy on Kashmir. India has given Pakistan a moral ascendancy and it is leaving no stone un turned to raise its voice against India at every possible forum.

The fourth struggle India has ignited is within the county itself. The peace loving people of this country are at pain to see the trial and tribulation of the common Kashmiri folks.  As the sufferings of Kashmiri people prolongs, the ill-conceived Kashmir policy of the current rulers has saddened many Indians. Some Indians are giving moral support to the common Kashmiris to get free from the Indian bondage.

Modi government on August 5, 2019 by rescinding Article 370 and 35 A has removed the ambiguity that prevailed in India’s stand over Kashmir since 1948.

The Modi government did a game changer act on August 5 and essentially dished out three big bang theories altering the classical view of India’s stand on Kashmir.

First, Modi government claimed that the people of Kashmir have no role in deciding their future. Since the territory in question is inalienable part of India, the views of the people do not matter.

In other words a new definition of democracy was made public by the Modi government on August 5; that democracy is of the state, for the state and by the state.

Citizenship of India was up for grabs for the Kashmiris, while rest of India had to reel under new citizenship laws under CAA, NPA and NRC. It’s another matter, there were no takers for Indian bait and on the contrary it funneled anti-India sentiments among the people of Kashmir.

Second big bang theory India propounded on August 5, 2019 was that Pakistan has no claim on Kashmir. In the new narrative Kashmir is inalienable part of India and bilateral talks if and when held between New Delhi and Islamabad on Kashmir will only discuss on the modalities of vacating the territories occupied by Pakistan.

The third big bang theory Modi government revealed on August 5 2019 was that the territory in question is nonnegotiable and Kashmir is internal matter and  India will not tolerate any third party intervention/ mediation.

All these three big bang theories propounded on Augusts 5, 2019 was to fix up the Kashmir problem with the assumption that by doing so, India will set the Kashmir house in order.

However, all these big bang theories after rescinding Article 370 and 35 A are flying like muck on the Modi government’s face.  The buffoonery of India’s Kashmir policy is at splendid display when after arguing that rescinding Article 370 and 35a is an “internal matter” and India will brook no third party interference, New Delhi is now engaged in public relation exercise ferrying International delegation to Kashmir.

Why India is doing this public relation exercise to influence international opinion. Do not by doing so; India covertly acknowledges that Kashmir has an international dimension which it cannot wish away.

India’s exercise to ferry a group of EU members to visit Kashmir to assess the ground situation is a calculated risk.  It may work or may not work in its favor. These very delegates whom the government is courting now may turn its back and target India for violating human rights which comes under international law with India being its signatory.

The complication of India’s Kashmir policy is getting compounded as the period of lock down in Kashmir prolongs. Modi government has fallen into Pakistani trap after internationalizing the Kashmir issue. It suits Pakistani interests because bilateral talks between India and Pakistan has not yet produced any result. Pakistani’s are at joy that India by internationalizing the Kashmir issue may make the international community rebuke India for its wrong doings in Kashmir. Definitely, the visit of foreign delegations has compromised India’s new found stand on Kashmir. Modi government, it looks like, instead of strengthening its position has further weakened its grip on Kashmir.

India’s new position that it has closed the dialogue with people of the Kashmir. They have to accept India’s diktat as fait- accompli but this diktat is fraught with dangerous consequences.  Implicit in this diktat is to make Kashmir an Indian colony where the people of land have no choices.  However by doing no one has done a cost – benefit analysis to keep such colony under Indian rule?

India’s claim that Pakistan has no locus-standi on Kashmir is highly contentious proposition. It is fraught with innumerable consequences. This stand has given Pakistan a huge impetus to lay claim on Kashmir. In fact, India has given Pakistan a moral ladder to ascend and canvass to the whole world  against its culpability.

India by challenging Pakistan’s claim on Kashmir is categorically denying any negotiated settlement on Kashmir. Such policy has many spin offs and may require full time occupation of Indian officials to plug in all the fall outs that may arise from such ill conceived policy.

The only summery that can be deduced fro the discussion above the responsibility of the ill conceived Kashmir policy solely rest on the Prime Minister of India. Some feel Mr. Modi may have got away with his ‘demonetizing act,’ but this time his Kashmir adventure may have to pay a heavy price. 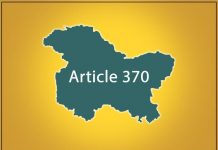