New Delhi: The Jamaat-e-Islami Hind (JIH) on Tuesday reiterated its demand to end restrictions imposed in Kashmir valley urging the civil society groups to come together to protect human rights of Kashmiris.

JIH president Syed Sadatullah Hussaini assailed the Narendra Modi government over the way it scrapped Article 370, which granted special status to Jammu and Kashmir on August 5.

“It is an assault on democratic spirits. People who value human rights should stand together for the people of Kashmir,” said Hussaini during monthly press conference at its headquarters in New Delhi.

Hussaini further said that the Centre revoked the region’s special status in “arbitrary manner” contradicting his earlier stand on the issue when a host of Muslim organisations, including the Jamaat-e-Islami Hind, had extended support to the Modi government on abrogation of Kashmir’s special status last month.

When reminded, Hussaini said, “The issue of human rights was mentioned in the letter also.” He further added that the Jamaat had repeatedly made its stand clear that “the rights of citizens should be restored at the earliest.”

“We don’t approve the way Modi government did all this. Muslim organisations stand firm on it,” he said. He, however, tried to doge the question on Jamiat Ulema-i-Hind’s prompt support to the Modi government on the issue.

When a reporter asked whether the Jamaat-e-Islami is scared of “hailing or assailing Modi or Madani”, Hussaini said, “Our stand is clear. The Jamaat-e-Islami Hind is a principled organisation and we don’t comment on what other groups do”.

Notably, the Jamaat on various occasions publicly condemned policies policies of right wing groups, including RSS,VHP etc by taking their names. But it apparently remained reluctant when it comes to condemn Madanis’ tilt towards right.

A source in the JIH, however, said, “Most of us don’t endorse the Madanis (Arshad Madani and Mahmood Madani) on the issue”, but added that no Muslim body would utter a word against other Muslim group. This has been “mutually accepted stand” of the Muslim organisations to avoid criticism in public”.

Recently, Jamiat Ulema-e-Hind (JUH) head Maulana Syed Arshad Madani had met RSS chief Mohan Bhagwat but no ‘ Muslim group’ uttered a word on it despite the fact that many questioned the timing of the meet.

It should be noted that Mahmood Madani convened a meeting on 22nd August . Many prominent Muslim figures including Syed Sadatullah Hussaini, head of  Jamat e Islami  and  BJP leader  Dr. M.J. Khan were present in the meeting. 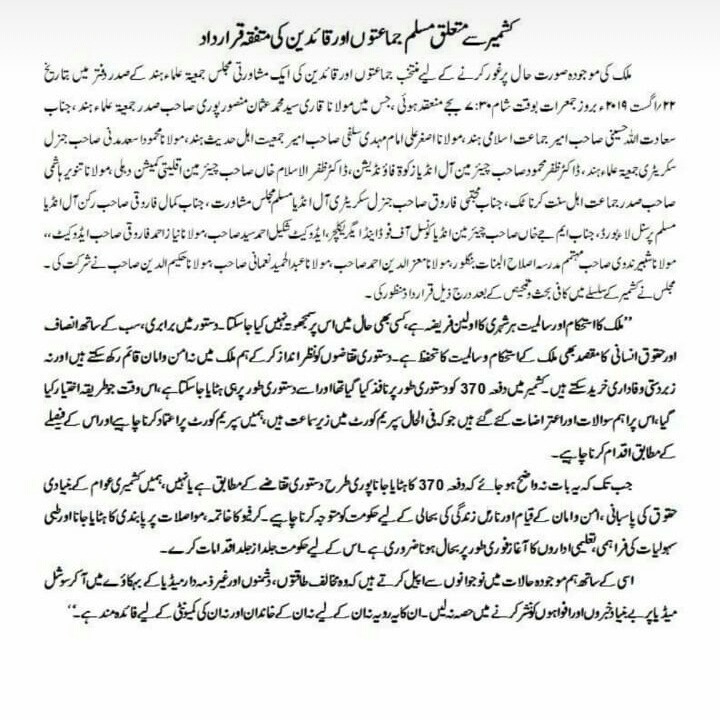 A resolution supporting government move on 370 was passed which reads: “It is the paramount duty of every citizen to preserve and protect the stability and integrity of the country and no compromise can be made on this issue’.

It also said ‘Article 370 was incorporated in the Constitution through due process of the law and it can only be revoked by the due Constitutional procedure.’

After that meeting the way Mahmood Madani supported the tyrannical policies of Modi government is known to all. He didn’t stop here; he went to Geneva and declared his full support to the abrogation of 370 but didn’t utter a single word on the sufferings of Kashmiri masses. 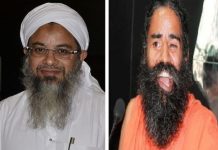 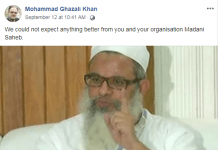 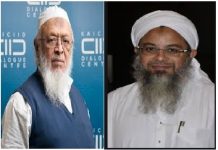