New Delhi : The news about joining an AMU research scholar to  Hizbul Mujahideen has not only shocked his parents , family members , his friends,  AMU administration but the entire nation.

Mannan Bashir 25, was pursuing PhD in Geology on ‘Structural and Geo-Morphological Study of Lolab Valley, Kashmir’from the Aligarh Muslim University. Earlier he received Bachelors in Geology and Earth Sciences from the University of Kashmir. He had also completed his Master’s and MPhil in Geology from AMU.

Mannan hailed from the Takipora Village in Lolab Valley of Jammu & Kashmir. Mannan is the son of Bashir Ahmad Wani, reportedly working as a lecturer while his other brother is working as a junior engineer in the state government. However, his family gets shocked to see his viral picture on social Media that claimed his entry into a Militant Rank and the family also approached the police for help. 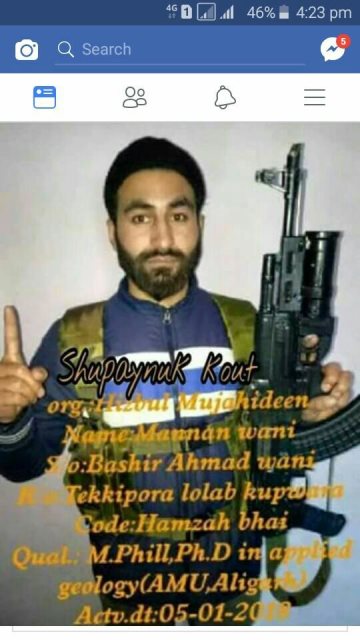 In the viral photograph, he is seen holding an under barrel grenade launcher and with a message declaring that he has joined the militancy. The photograph also claimed that Mannan Joined Hizbul Mujahideen on January 5 with a secret code name ‘Hamza Bhai’. While according to the description that Mannan has PhD in Geology from, but his family claimed that he has not received degree so far.

Mannan’s family also claimed that; he left home for Aligarh around a month ago. Since then, the family thought that he was in Aligarh. He was in continuous contact with the family.

Reportedly, last November, when he was on way to Srinagar from his home, the passenger vehicle he was travelling in got stopped at four places and the passengers were asked every time to prove their identity.

Mannan narrated the incidence through a Facebook update, where he wrote “The most disgusting thing was when an ordinary SOG personnel donning black uniform posed questions like, why had I grown such long hair, why didn’t I trim my beard if intend to look smart, why do I wear long boots, why do I wear a shawl in such a young age?”

He also mentioned about a lady sitting next to him who likened their situation to those of slaves, “On this disgusting day, the best moment happened when I got a compliment from the Indian Army officer (who also checked my identity card, but spared me from getting down from the car) about my looks resembling the famous Commander, who has given them sleepless nights, and me passing a gentle smile without uttering a single word,” he wrote in his Facebook post.

At last, he added; “This is not the first time nor am I the only one to face such humiliation at the hands of men in uniform. This has been a daily affair and a kind of normal routine hazard faced by all kinds of people irrespective of age and gender in the Valley.

But then, some fools will still want to make us believe that our prosperity lies with our occupier and that we aren’t slaves.”

According to the AMU Website “Mr Mannan Bashir Wani, Research Scholar at Department of Geology, Aligarh Muslim University has been awarded the ‘Best Paper Presentation Award’ in an International Conference on ‘Water, Environment, Energy and Society’ (ICWEES) held at AISECT University, Bhopal.The award was conferred to Mr Wani for his paper ‘Flood Risk Assessment of Lolab Valley from Watershed Analysis Using Remote Sensing and GIS Techniques”. And around 400 delegates from 20 countries, including China, US and the UK, participated in the conference.

However, Aligarh Muslim University has expelled Mannan, after the whole ruckus.

The story of Mannan is telling a lot. The time has come for the Indian government to look into its own policy. The time has come to ask ‘what is forcing brilliant students like Manna to join militancy? The sooner we do our own introspect the better.