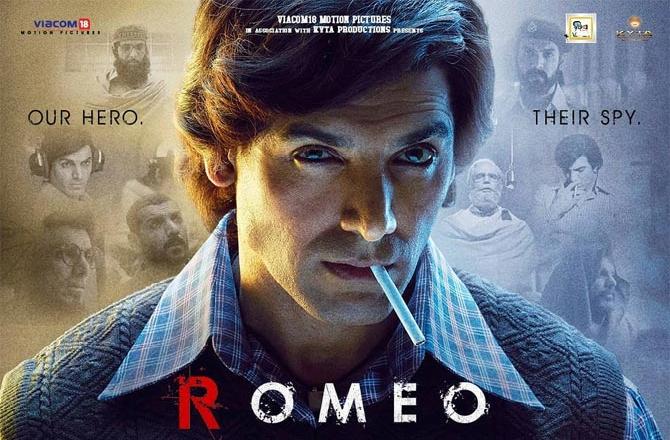 The upcoming movie ‘Romeo Akbar Walter’ (RAW) has courted a controversy. The family members of Ravindra Kaushik a.k.a. Nabi Ahmed Shakir, the Indian spy, who was sent to Pakistan as an undercover agent and on whose real life story this movie is based, says that the movie, denies credit to this unsung Indian hero.

Ravindra’s family is demanding for his name in the credit line or the titles of the movie claiming that the story of the film “Romeo Akbar Walter” is based on the real life history of Ravindra Kaushik.

‘Romeo Akbar Walter’ (RAW)  is yet another biopic churned out by the Bollywood where  John Abraham’s plays the role of Ravindra Kaushik claims his family members, adding that while biopics  like ‘Sanju’, ‘Azhar’, ‘Bhag Milka Bahag’ etc have given credit to the real life characters, it’s being denied to Ravindra Kaushik on whose life story this movie is based.

Ravindra Kaushik was born in Sri Ganganagar, Rajasthan on 11 April 1952. He was an alleged spy of Indian Research and Analysis Wing (RAW)  who lived as undercover agent in Pakistan till he was he was caught and jailed there till his death in November 2001.

It happened so that some official of India’s external intelligence agency (RAW), saw Kaushik displaying his talent at the national level dramatic meet in Lucknow. He impressed them by his theatrical abilities and they contacted him and offered a job of being an undercover Indian agent in Pakistan.

Ravidra Kaushik being from Sri Ganganagar, a city near Rajasthan’s border with Punjab was well versed in Punjabi, which is spoken in parts of Pakistan, could fit in very well to his assigned job.

He was given extensive training for two years in Delhi where he was taught Urdu, given religious education and was acquainted with the topography and other details about Pakistan. He underwent circumcision so he could pass as a Muslim.

It was in 1975, at the age of 23, Kaushik was sent to Pakistan on a mission with the name “Nabi Ahmed Shakir.” He was successful in getting admission in Karachi University on fake high school and graduation degree of some Pakistan institution.

He completed his LLB from there and joined Military Accounts Department of Pakistan Army and became an auditor.  He married a local girl named Amanat, the daughter of a tailor in one of the army units, and fathered a boy who later died or was killed in 2012.

Ravidra Kaushik while in military service especially from 1979 to 1983 passed on valuable information to RAW which was of great help to the Indian defence forces. He was given the title of ‘Black Tiger’ by India’s then home minister S.B. Chavan.

However, his nemesis came in September 1983, when India’s external intelligence agency RAW sent another operative to Pakistan. This low level spy whose given name was Inyat Masih was told about Ravindra Kaushik and was asked to get in touch with him, once he settles down in Pakistan.

This never happened and as soon as Inyat Masih entered Pakistan he was caught.  During the interrogation he revealed his true identity and also that of Ravindra Kaushik who was an undercover agent.

Thereafter Kaushik was taken into custody and was tortured for two years by the Pakistani Intelligence personals at an interrogation centre in Sialkot.

In 1985, the Pakistan Army Court sentenced him to death. Later, the Supreme Court of Pakistan commuted his death sentence to life imprisonment.

During the last sixteen years of his life, Kaushik was kept in jails at various cities of Pakistan. These include Sialkot, Kot Lakhpat and in Mianwali jails.

Even from Pakistani jails, Kaushik managed to secretly send letters to his family in India, which revealed his poor health condition and the trauma faced by him in jails.

Finally in November 2001, Kaushik succumbed to pulmonary tuberculosis and heart disease in Central Jail Mianwali. His body was never claimed by the India’s external intelligence agency RAW and so his family members could not get his mortal remains.

Ravindra Kaushik the spy, the patriot, the unsung hero of India thus remains unknown till Bollywood decided to make a film ‘Romeo Akbar Walter’ (RAW)  on his life and times.

Actor John Abraham who places the lead role in the film ‘Romeo Akbar Walter’ in a press meet has said; ‘there is nothing wrong in making films about war heroes. I think it’s a great time for India, the audience to have some. If you look at Hollywood, it makes fantastic war films and they glorify their soldiers, so why can’t we? ” he said.

John said no one is bad or good in this film; it’s just how you look at things. We are not depicting any other side as the bad side. It’s a story of a spy who goes across the border.

John added to his comments that this film is not a chest-thumping nationalist project.  “It’s not jingoistic, typical flag saluting film. It’s very different and that’s why I am proud to be associated with it” he said.