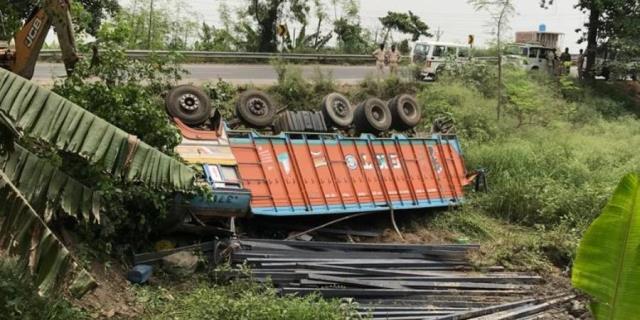 Patna, May 19 :  Nine labourers were killed on Tuesday morning when a truck carrying them collided with a bus in Bhagalpur district of Bihar, police said. Four others were injured in the accident.

Police said the accident occurred when the truck loaded with iron bars reached Ambho Chowk in Kharik police station jurisdiction. It hit an oncoming bus, following which the truck tipped over, trapping the labourers under the falling iron bars.

Police later said it did not suspected more persons could be trapped under the iron bars.

Naugachia SDM Mukesh Kumar said the victims may have hitched a ride on the truck while returning to their homes. The injured have been admitted in a hospital.

It was learnt that Aadhaar cards found at the accident spot indicated that the deceased were from East Champaran district.

have The truck driver absconded after the accident.