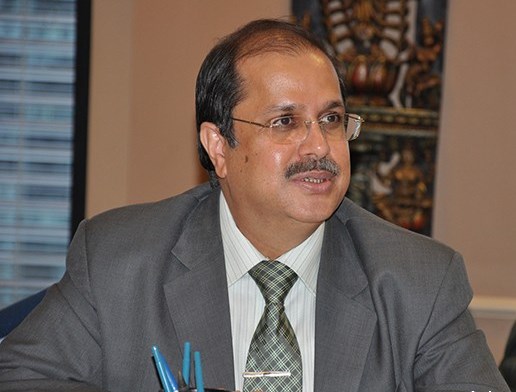 Hyderabad, April 24 : With Saudi Arabia looking to diversify its economy, India’s new ambassador to the kingdom, Dr. Ausaf Sayeed, believes this offers new opportunities for both the Indian industry and the workforce.

“The opportunities for Indian companies to participate in the Saudi expansion will also grow,” Saeed told IANS in an interview.

Saudi Arabia has unveiled its Vision 2030 plan to reduce dependence on oil and diversify its economy by focusing on sectors like health, education, infrastructure, recreation and tourism.

Sayeed, who will be taking charge on April 28, feels that the recent Saudi moves like taxation and increase in fees for different services did not impact much on the Indian Diaspora as its numbers at 2.7 million still remain quite strong.

The diplomat, who earlier served as High Commissioner to Seychelles, Ambassador to Yemen and Consul General in Chicago and Jeddah, said while reserving some categories of jobs for locals is the prerogative of Saudis, Indians continue to go to the Kingdom for jobs.

Hailing from Hyderabad, Sayeed also served as Consul (Haj) in Jeddah and Second/First Secretary in Riyadh besides holding various diplomatic assignments in Egypt, Qatar and Denmark.

Terming his new assignment as personally challenging, he noted that it comes at a time when the bilateral relations between India and Saudi Arabia were at their peak, backed by a series of high-level visits in last few years with the latest being that of Crown Prince Mohammed bin Salman’s visit to New Delhi in February.

“It is very significant that both countries are working very closely in different domains like economy, trade, energy security, healthcare etc,” he said.

Sayeed said his priority would be to facilitate implementation of all the MoUs and agreements signed bilaterally.

Saudi Arabia is Inddia’s fourth largest trading partner. The bilateral trade is almost $28 billion although it is mainly the import of oil which tilts the balance in Saudi Arabia’s favour. Still, non-oil exports from Saudi Arabia and from India are growing, he said.

“There are almost 300-350 companies of India involved in some way or the other in the development process there. My priority will be to see that the business relationship between India and Saudi Arabia is consolidated.”

He believes that there is scope of taking the bilateral trade to $30-35 billion in the years to come with the normal trade but a recent announcement is expected provide further fillip to the trade and business ties.

The Crown Prince, during his visit, announced the intention to invest $100 billion in terms of new investment in India in sectors like energy, refining, petrochemicals, education, healthcare, infrastructure, agriculture and minerals and mining.

The ambassador said both sides will come out with concrete projects for investments in other areas.

He recalled that during the Crown Prince’s, visit the two countries signed several agreements to promote investment in different sectors. There was a MoU for investing in the National Investment and Infrastructure Fund of India. Two MoUs were signed on cooperation in tourism and housing. Invest India and Saudi Arabia General Investment Authority (SAGIA) also signed a framework cooperation programme.

On the proposed strategic partnership council mooted during the visit, Sayeed said the idea perhaps was to evolve high level consultancy mechanism where the two leaders can monitor the relationship quite closely.

The ambassador said he would try to ensure that the interests of 2.7 million India Diaspora and the Indian workers in the Kingdom are safeguarded. “We will work closely with Saudi counterparts and agencies there and see that the rights of Indian workers rights are protected and at the same time they contribute meaningfully within the ambit of the Saudi rules and regulations and laws.”

He did not agree that the family members of Indian expats were coming back due to imposition of taxes and an increase in ‘iqama’ fee. He pointed out that the Indian Diaspora had always sent their children to India or elsewhere for higher education. “Although for some people to maintain families may be little bit challenging with the cost of living and other things adding to it, nevertheless the number shows it is too high. People are still going and living comfortably.”

On Saudisation, he said that at the end of the day, countries are responsible for providing jobs to their own nationals. “If certain jobs can be done by their own nationals, it is unfair on part of anybody to expect these jobs to be opened to outsiders. To that extent there is national commitment of every country. Having said that I feel that there are jobs and Indians continue to go there.”