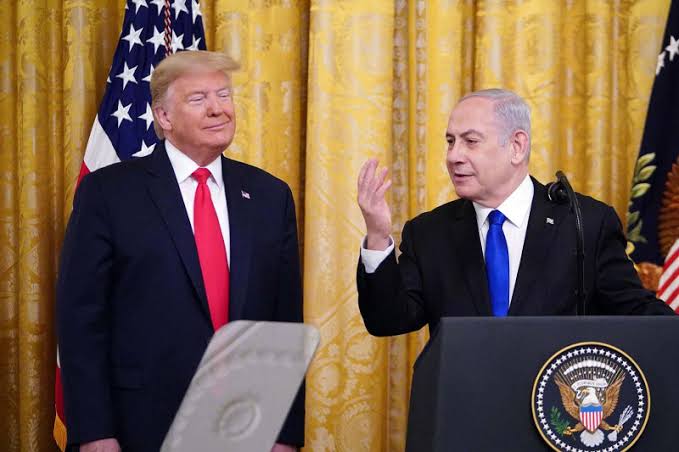 New York, Jan 29 US President Donald Trump has unveiled his Middle East peace plan that backs Israel”s continued control of territories and East Jerusalem that are in dispute with Palestinians and scales back hopes of a full-fledged nation for them.

Even before the plan crafted under the guidance of Trump”s son-in-law Jared Kushner over three years was unveiled on Tuesday, Palestine Authority President Mahmoud Abbas had rejected it despite the US President”s lure of a $50 billion for the Palestine state.

The plan was unveiled at the White House about an hour before the Senate was to resume Trump”s impeachment trial.

He was accompanied by another leader under a cloud, Israeli Prime Minister Benjamin Netanyahu, who faces an election while charged with corruption, and they both expect a boost among their bases from its announcement.

But the announcement was boycotted by Abbas, who along with other Palestinian leaders had no input into the plan.

“My vision presents a win-win opportunity for both sides, a realistic two-state solution that resolves the risk of Palestinian statehood into security,” Trump declared.

Appealing to Abbas, Trump said that if he chose “the path to peace, America and many other countries, we will be there”.

The plan runs counter to UN resolutions that, as Secretary-General Antonio Guterres pointed out, calls for a two-nation settlement based on the borders before the 1967 war when Israel captured the West Bank and East Jerusalem.

Nearly 140 countries, including India, recognise Palestine as a nation.

Trump is counting on the waning support for the Palestinians from key Arab nations, at least at the level of rulers, to pressure Abbas to come to terms with the plan.

He said that Bahrain, Oman and the United Arab Emirates have done “incredible work” in helping the US with the plan.

Egypt and Saudi Arabia expressed appreciation for Trump”s peace efforts but did not publicly endorse the plan.

The Trump-Kushner plan would allow Israel to keep East Jerusalem and large areas of the West Bank.

The Israeli settlements on the West Bank would continue and Trump gave the assurance that no one would be uprooted.

A map tweeted by Trump with the outlines of the proposal showed a broken up West Bank that would be the Palestinian territory, but with Israeli settlements dotting them.

The plan offers a four-year window for the Palestinians to negotiate with Israel for a statehood that would have less status than what has been offered before.

Israel will also have general oversight of the territories now controlled by the Palestine Authority.

Unlike earlier American diplomacy to find peace in Middle East, which tried to make the Palestinians and the Israelis to negotiate, the Kushner project is a unilateral plan presented as a fait accompli.

Former President Bill Clinton had brought together then Palestinian leader Yasser Arafat and Israeli Prime Minister Ehud Barak for a summit in the US in 2000 but it did not lead to a settlement of their conflicts.

The Trump-Kushner plan is meant to appeal to the Christian fundamentalist base of Trump rather than to the Jewish voters, a majority of whom support the Democratic Party and are more moderate.

In Israel, the plan was to bolster the politically embattled Netanyahu, who withdrew claims of immunity on Tuesday and the Attorney-General Avichai Mandelblit filed charges of bribery and fraud against him.

Guterres”s Spokesperson Stephane Dujarric said: “The position of the UN on the two-state solution has been defined, throughout the years, by relevant Security Council and General Assembly resolutions by which the Secretariat is bound.

“The UN remains committed to supporting Palestinians and Israelis to resolve the conflict on the basis of United Nations resolutions, international law and bilateral agreements and realizing the vision of two States – Israel and Palestine – living side by side in peace and security within recognized borders, on the basis of the pre-1967 lines.”