“30 journalists covering the protests were injured” by the Israeli army, UN Human Rights High Commissioner Michelle Bachelet said in a statement, referring to the protests held along the Israel-Gaza fence.

Since the start of protests in March 2018, known as Great March of Return, a total of four Anadolu Agency journalists were also wounded, two in Gaza and two in occupied West Bank.

In the same period, two other journalists working in other media organizations in Gaza were killed.

Bachelet said the violations continued since the adoption of UN Resolution 40/13 on March 22 this year.

The resolution ensures accountability and justice for all violations of international law in the Occupied Palestinian Territory, including East Jerusalem.

“Serious violations of international human rights law and international humanitarian law have continued in the Occupied Palestinian Territory in this period, including in the context of large-scale civilian protests in Gaza,” the statement said.

“As a direct result, since 22 March 2019, 13 Palestinians, including five children, have been killed,” she said.

Bachelet said hundreds of others, including health workers and journalists, have been injured.

“Many have been left with permanent disabilities, including 20 who have undergone amputations, two who have been paralysed, and six who have permanently lost their vision in one eye,” she said.

Bachelet added that these 13 deaths since March 22 follow the killings of 189 Palestinians in the previous 12 months – including 38 children.

Since the Gaza rallies began in March last year, nearly 270 protesters have been martyred — and thousands more wounded — by Israeli troops deployed near the buffer zone.

Demonstrators demand an end to Israel’s 12-year blockade of the Gaza Strip, which has shattered the coastal enclave’s economy and deprived its two million inhabitants of many basic amenities.AA 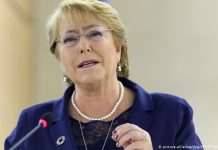