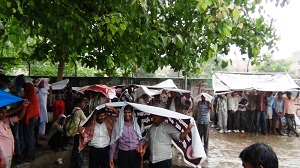 Activists of Rihai Manch continue dharna under rain in Lucknow

Rihai Manch started the dharna on 20th May, demanding arrest of the officers named accused by Mujahid’s family in the FIR and action on the recommendation of the RD Nimesh Commission. Mujahid was killed in police custody on 18th May. He was abducted by police in Dec. 2007 and later implicated in a terror case. The RD Nimesh Commission appointed by the previous state government of Mayawati declared Mujahid’s arrest as fake and illegal.

Addressing the demonstrators under the rain, Megasaysay awardee Sandeep Pandey said the Samajwadi Party government should not be in illusion that by removing the tent they would force the Rihai Manch from demanding justice for Khalid Mujahid. “It is a battle for justice and people will continue to fight until last breath even if the government resorts to lathi or gun,” said Pandey. 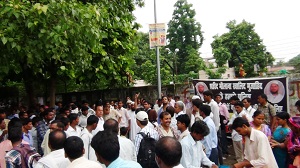 According to Rihai Manch, two days ago, local police had told them that they would not allow them to continue the dharna as they were making communal speeches and accusing top police officers for the custodial killing of Khalid Mujahid.

Meanwhile, Rihai Manch has announced to hold mass Maghrib prayer and dua at the dharna site tomorrow when the agitation will be completing 60 days.