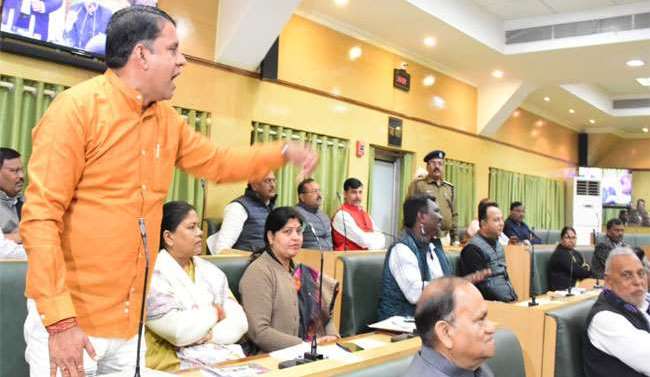 Irfan Ansari, speaking on the motion of thanks to the Governor”s address, said “BJP and RSS are responsible for the killing of Tabrez Ansari”. The Congress legislator”s remark invited a sharp reaction from the BJP MLAs.

Tabrez Ansari was thrashed by a mob in the Seraikela-Kharsawa district of Jharkhand on June 17, 2019 resulting in his death a few days later.

The BJP legislators started demanding that the ”unsavoury” remark made about the BJP and the RSS should be expunged and said that the Congress legislator should express regrets about making such a comment. The legislators came to the well of the House demanding an apology and expunging of the remark.

“What is the proof of the Irfan Ansari allegation,” said BJP legislator C.P. Singh.

Assembly speaker Rabindranath Mahto pacified the BJP legislators and asked them to return to their seats. The Speaker later expunged the Congress legislator”s remark.

The Assembly Speaker”s move to pacify the BJP legislators however failed. He left the apology issue to the conscience of the Congress legislator, who categorically said that he would not apologise.

The BJP legislators then raised more slogans forcing the Speaker to adjourn the House.

When the House reassembled, the BJP legislators again demanded an apology from the Congress and came to the well of the House. The issue got further aggravated when CP Singh said, “What if I say Irfan Ansari was a terrorist who attacked Mumbai, he was a sleeper cell of the ISI and agent of Pakistan, then what”?

Singh”s remark triggered heated exchanges between the treasury and opposition benches as MLAs stood on their seats and yelled at each other.

The Speaker tried to pacify those BJP legislators who were in the well of the House.

Amid the BJP legislators” protest in the well, the Speaker allowed Chief Minister Hemant Soren to speak on the motion of thanks.

AJSU president Sudesh Mahto objected to this and said his party should be allowed to speak on the motion of thanks. The Speaker ignored his plea.

The Chief Minister gave his speech and the motion of thanks was passed by a voice vote amid protests by the BJP legislators in the well.