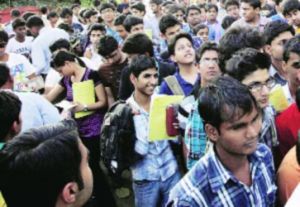 The top 150,000 scorers in the exam will be called on June 2 to take the JEE Advanced, which is meant for admissions into prestigious Indian Institutes of Technology (IITs).

The results will be declared May 7.

About 47,748 students had registered themselves to appear for the exam at Patna, followed by Kanpur from where 43,000 had registered.

The exam was conducted by the Central Board of Secondary Education (CBSE), which will also evaluate candidates for admissions into BE, B.Tech and B.Arch courses in National Institutes of Technology (NITs), Indian Institutes of Information Technology (IIITs), Delhi Technological University and other centrally-funded technical institutes.

According to Ramesh Batlish, a JEE expert, the cut-off is expected to go higher as the paper was relatively easy.

The JEE Main will be held online April 8-25 in 29 cities including three cities abroad — Colombo, Kathmandu and Singapore.

The JEE Main was formerly known as the All India Engineering Entrance Examination (AIEEE).

As per the statistics on the exam available with the CBSE, this year the enrolment numbers increased by 280,000 candidates as compared to the last year.—IANS.