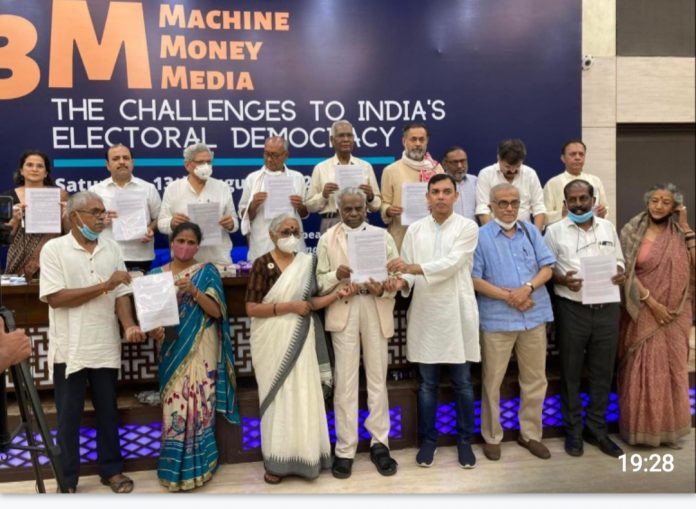 New Delhi- At a conference held at the Constitution Club on Saturday 11 major political parties and over 200 civil society members of the civil society pledged to fight against the machine, money, and media power that currently pose the greatest threats to India’s democracy. The conference was jointly organized by the Constitutional Conduct Group (CCG), Jan Sarokar, and People First, which deliberated upon the prevailing situation in reference with 3Ms i.e machine, money, and media and passed several resolutions.

Chairing the first session, former diplomat Deb Mukherji stressed the need for civil society and political parties to come together during these unprecedented times.

In a book titled “Electoral Democracy?,” MG Devasahayam summarised the work of the Citizens Commission on Elections, which examined the 3M threats to democracy as identified by experts in India and around the world.

‘An Inquiry into the fairness and integrity of Elections in India’, Dr. Subhashis Banerji, a professor of computer science at IIT Delhi, discussed how EVMs can be manipulated and the urgent need to assure the voting process’ verifiability and auditability.

Anjali Bhardwaj, co-convenor of the National Campaign for Peoples’ Right to Information, discussed how electoral bonds had allowed for the unlimited flow of anonymous large sums of money without informing the public of the donors to the parties.

Pamela Philipose, senior journalist, spoke of the urgent need to regulate fake news, propaganda and social media manipulation which was weaponized by BJP in elections.

Eleven political party leaders talked at the second session about the challenges posed by 3Ms and their opinions on the proposed resolutions.

Senior Congress leader and MP,  Digvijay Singh said he did not trust EVMs since voters could not be certain where their votes went. Due to electoral bonds, the public was unaware of where their money was being spent, and the BJP was in control of the media by using  unaccountable money and even  funding the spread of fake news. He described how the BJP was dismantling politicians and overthrowing governments in several states utilising its financial clout and a variety of institutions, including as the ED, CBI, and IT.

According to Sitaram Yechury of the CPIM, money bills were used to smuggle electoral bonds into the country. He claimed that even after more than three years had passed and numerous legal challenges, including one he himself filed, the Supreme Court had still not reached a decision. He asserted that it is now necessary for all political parties to band together and launch a massive Andolan in order to defend democracy. He claimed that because of the manner the ECI is operating, it has resembled the Executive Council rather than being a separate constitutional entity.

CPI leader D Raja said he was in full agreement with the resolutions and had in fact adopted similar resolutions at their recent national party congress. He said the fact that 90% of the bonds were transacted in the highest denomination of Rs. 1 crore showed that this was not being given by ordinary persons showed the control of the electoral funding was completely under corporate control. He said there is no level playing field due to money and muscle power. On the issue of EVMs, D Raja said that he himself has approached the Supreme Court seeking full VVPAT count. He said civil society and parties must come together otherwise a flawed electoral democracy will lead to autocracy.

Agreeing with the resolutions, CPI leader D Raja claimed that the fact that 90% of the bonds were sold in the highest denomination of Rs. 1 crore demonstrated that they were not being donated by regular citizens and that corporate interests entirely controlled the funding of elections. Due to resources like money and strength, he said there is no level playing field. On the EVM issue, he stated that he has personally petitioned the Supreme Court for a complete VVPAT count. He asserted that in order to prevent tyranny from emerging from a defective electoral democracy, civil society and parties must work together.

Dr. Mairajuddin Ahmed of the RLD said  the influence of large money and criminalization has severely distorted the electoral landscape. He claimed that even bureaucracy is being openly misused today. It is necessary to combat the well-known and well-documented practises of selling tickets for cash and deploying criminal elements to scare voters.

NCP leader Jitendra Awad said the fight to save democracy has to be on the streets. EVMs can be manipulated, everyone knows – but where will you go for justice?

“The institutions, including the Supreme Court, are all compromised. As a result, we must appear in a court of people. Everyone witnessed how the BJP overthrew the Maharashtra government by purchasing so many MLAs that they effectively seized the entire party. However, how can we speak out when no one is paying attention? We must fight considerably harder and engage the populace on all fronts”. He claimed that fascism is at its height.

No technology can be completely tamper-proof, according to Suresh Reddy of TRS; hence any promises of 100% error-free voting must be contested. Even the anti-defection statute, according to him, needs to be reviewed.

BSP MP, Danish Ali said this meeting was significant because it represents a historic alliance of political groups and citizens to defend and restore democracy. He said the BSP fully supported each and every resolution and will participate in any effort to bring attention to this issue across the nation.

Ghanshyam Tiwari, the leader of the SP, questioned how machines could be protected from hijacking when every election-related machine has already been compromised. The essential tenet of fair voting is that a voter should have complete faith in the outcome of their vote; both during the election and after the results are announced. Naval Kishore of the RJD stated that the party is dedicated to the resolutions and will participate in all initiatives to address these electoral politics distortions.

Dr S Q R Ilyas, president of Welfare Party of India said the party believed that voting should happen through ballot papers and there should be proportional representation in heterogeneous societies like India.

Yogendra Yadav of Swaraj India party appreciated the detailed manner in which the resolutions have been put together. He said the need was for a national effort to resist the undermining of democracy.

Aruna Roy presided over the final session of the day, where representatives from several states gave presentations and discussed how to move forward with the issues raised by the conference. Many people voiced their opinions, including Nikhil Day, Thomas Franco, Rolly Shivhare, Apar Gupta, Pankti Jog, Prasanna, Dinesh Abrol, and Bezwada Wilson.

It is recognised that purely EVM-based voting and counting does not comply with ‘Democracy Principles’ which require that each voter should be able to verify that his or her vote is cast-as-intended; recorded-as-cast and counted-as-recorded. We demand the following:

iii. The integrity of the VVPAT slips and the EVM machines during the entire time after polling and before counting and auditing must be ensured in a manner that is verifiable. The VVPAT slips must be printed in such form and manner to be preserved for a minimum of 5 years.

Massive money power and the criminal muscle-power created thereof is destroying the very integrity of India’s elections. Candidates’ expenses have a ceiling but political party spending does not have any ceiling. The fast-rising economic oligarchy in the country, threatening India as a welfare state is the direct fallout of this extreme criminal and money power in elections which is the fountainhead of all corruption in the country. It compromises the integrity of democracy in multiple ways: it raises the entry barriers to politics; excludes honest candidates and parties; leads to corruption and big money controlling the state; distortion of policy making in wasteful, inefficient, and anti-democratic directions; and exacerbation of polarization. The government, using the Money Bill route to bypass Rajya Sabha, introduced electoral bonds that have increased opaqueness and consolidated the role of big money in electoral politics. The Electoral Bonds Scheme in its current form must be immediately discontinued. There must be transparency in political party funding. Details of donations, including amounts and names of donors, should be in the public domain.

The free media plays a crucial role before, during and after elections in creating an environment for the dissemination of information that enhances people’s ability to vote in an informed way.  India’s mediascape has undergone a major transformation with the exponential growth in the use of the internet across the world and also in India. Unfortunately, communication technologies and media platforms are creating polarization through the circulation of disinformation and hate- filled text posts and tweets. Despite guidelines and codes, ECI has not seemed to be taking cognizance of the many violations in the past elections. ECI failed to curb fake news online before and during these elections. Procrastination, silence, and inaction characterised ECI’s responses even to serious violations of Model Code of Conduct and media code. We urge the ECI to take strong and effective actions against the offenders whosoever they may be.