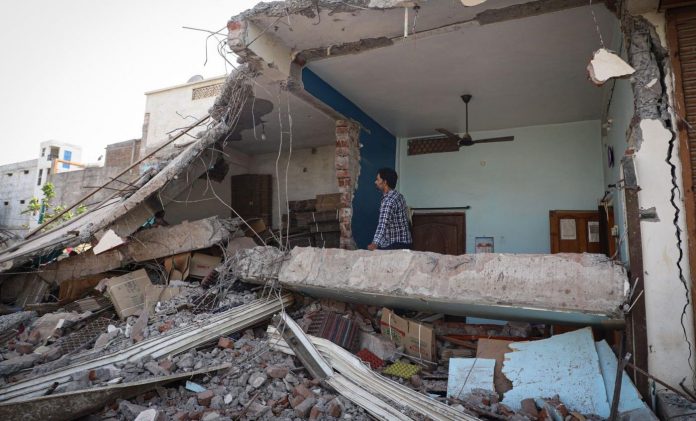 BHOPAL : A recovery notice issued to a 12-year-old boy by a tribunal in Madhya Pradesh has again sparked debate over the Prevention and Recovery of Damages to Public Property Act, which came into effect in the state from December last year.

The juvenile received the recovery notice of Rs 2.9 lakh for allegedly damaging private properties during the communal violence that broke out in Khargone in April this year.

The recovery notice was issued to the boy in August on the basis of a complaint lodged by a woman, who accused the former of damaging her house when a mob went on rampage during Ram Navami celebrations on April 10.

The communal violence had prompted the state administration to impose months long curfew in the entire Khargone district, which was lifted gradually only after the situation became normal.

The boy’s family had filed an appeal before the Indore bench of Madhya Pradesh High Court, seeking quashing of the notice. But on September 12, the court dismissed the petition, saying any objection should be filed with the tribunal, set up under the Prevention and Recovery of Damages to Public Property Act.

“If an objection is filed, the same shall be considered and decided by the tribunal in accordance with the law,” the order read.

The notice sent to the boy clearly mentioned that he is 12-year-old, and held him responsible for damages to the tune of Rs 2.9 lakh. Besides the boy, similar notices were issued to seven other persons, including the boy’s father.

Advocate Ashhar Ali Warsi, who is representing the boy in the court, claimed that the tribunal had acted “arbitrarily without applying the essentials of law”.

“The definition of the act has a clear interpretation that the whole act depends upon the criminal status based upon Indian Penal Code (IPC) and while the boy filed his objection before the tribunal, it was rejected on vague grounds of civil procedure,” Warsi told the press.

Warsi also contended that while the tribunal said this was a civil recovery, “it is strange because the act is following criminal procedure, as claims are being awarded”.

Warsi also questioned the Prevention and Recovery of Damages to Public Property Act, stating that it “does not have a clear definition as to whether it will be governed under civil law or criminal Law”.

As per reports, following the communal violence in Khargone, 343 recovery complaints were filed before the tribunal, of which only 34 were accepted. So far, it has settled six claims – four by Hindus and two by Muslims.

Around Rs 7.46 lakh have been recovered from 50 persons so far.

The Madhya Pradesh Prevention and Recovery of Damages to Public Property Act was passed in December last year, in imitation of another BJP-ruled state, Uttar Pradesh. The law enables recovery of compensation for willful damage to public and private property during strikes, protests or group clashes.

Under the law, if compensation is not paid within 15 days, the accused has to pay 6 per cent interest and compensate the affected party in the process of the application.

The tribunal has been vested with the powers similar to a civil court and must decide on the claims within three months. The law allows it to seize assets of the accused if they cannot pay compensation. — IANS

Madhya Pradesh : A Muslim man donates blood to save life of ailing Hindu baby in Chhatarpur