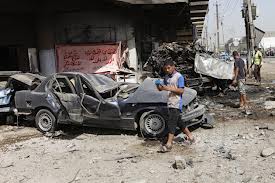 Baghdad, July 2 : At least 15 people were killed and 56 others wounded in a wave of bombings in the Iraqi capital of Baghdad Tuesday, police said.

Six people were killed and 20 others wounded when two car bombs exploded in a popular market in the Shuala area in northwestern Baghdad, a police source told Xinhua on condition of anonymity.

Four people were killed and 15 others wounded when two car bombs struck a market in the Shaab area in northeastern Baghdad, the source said.

A car bomb exploded in the Kamalea area in eastern Baghdad, killing three people and injuring 11 others, while another car bomb went off near a parking garage in the Dora district in the southern part of the city, killing two people and wounding 10 others.—IANS.