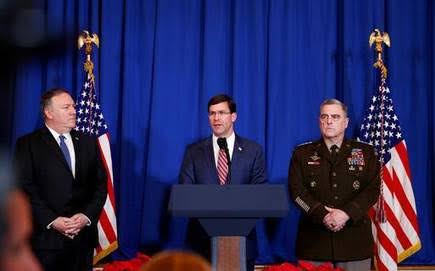 Baghdad, Dec 30 At least 25 people were killed after the US attacked an Iranian-backed militia group in Iraq and Syria, the Iraqi Popular Mobilization Forces (PMF) said on Monday.

The US strikes on the Kataib Hezbollah (KH) militia group, a PMF faction, took place on Sunday after an attack earlier this week on an Iraqi base near Kirkuk province killed an American civilian contractor, reports Efe news.

“The death toll from the brutal attack on the headquarters of the Brigade 45th and 46th has reached 25, with 51 others injured,” said head of PMF directorate Jawad al-Rubaie.

Al-Rubaie added the number of fatalities in Iraq”s western Anbar province was expected to increase as there were wounded in serious condition.

The Pentagon had confirmed on Sunday it had carried out “precision defensive strikes” that will “degrade KH”s ability to conduct future attacks against Operation Inherent Resolve (OIR) coalition forces”.

“KH has a strong linkage with Iran”s Quds Force and has repeatedly received lethal aid and other support from Iran that it has used to attack OIR coalition forces,” it added.

The coalition is in Iraq to help ensure the lasting defeat of Islamic State (IS) terror organization and provide advice and assistance to the Iraqi security forces, according to the Pentagon.

Abdel Mahdi strongly rejected US unilateral action that could lead to an escalation of the conflict, according to Khalaf.

Since mid-October, at least a dozen Iraqi military bases and government headquarters hosting US troops have been targeted by unknown groups. The US, however, has blamed pro-Iranian militias in the country.

Abdel Mahdi resigned last month as Prime Minister after pressure from protests that have gripped the country for almost three months.

In October, hundreds of people took to the streets in different parts of the country to demand more basic services and protest corruption and unemployment.

More than 500 people have been killed in the rallies.

Last year, there were also demonstrations in several Iraqi cities, particularly in Basra, against corruption, an endemic problem in the country since the Baath regime of Saddam Hussein controlled the country, although it was toppled in 2003 by US troops.