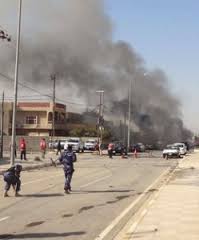 Baghdad, Aug 23 : At least 25 people were killed and 47 injured in a wave of attacks in different parts of Iraq Thursday, most of them targeting the security forces, the police said.

Ten soldiers and four civilians were killed and as many people injured when a suicide bomber attacked an army checkpoint with a booby-trapped tank near Ramadi, 100 km from Baghdad, reported Xinhua citing a police source.

Six people were killed and 21 wounded when a roadside bomb exploded during a wedding ceremony in Dujail, 60 km from Baghdad, in the evening, said a police source.

Also, unidentified gunmen opened fire at a checkpoint of the Iraqi army in Aslah neighbourhood in Mosul city, some 400 km from Baghdad, killing two soldiers, said another police source.

Two Iraqi soldiers were killed and four civilians wounded when a roadside bomb targeted an Iraqi army patrol in Baath neighbourhood in eastern Mosul, he added.

Moreover, unidentified gunmen shot dead a woman before her house in an area in east of Mosul, the police said, adding eight people, including two soldiers, were wounded when a car bomb exploded in Tal Afar, 70 km from west of Mosul.

Four people were injured when a car bomb went off at a parking lot of a government office in the city centre of Kirkuk, some 250 km north of Baghdad, said a source.—IANS.