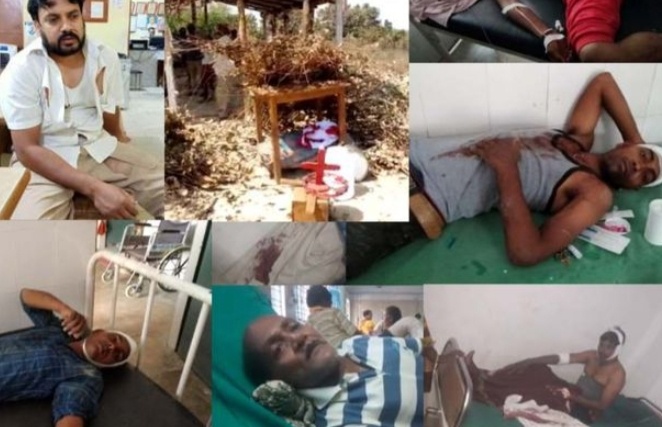 Rcently enacted anti-conversion laws are now being used against the Muslim community too as the BJP’s manifesto promising a nation-wide law to check evangelisation by “missionaries” and Islamic population explosion feeds the orchestrated rhetoric that the Hindu population will become a minority.

New Delhi:  Even in the curfew of Covid-19 and at the height of the COVID-19 spread, persecution of Christian minority has continued recording as many as 327 cases of hate and targeted violence against the community in India which accounts for mere 2.2 percent of the national population. This was revealed in the annual report of 2020 released Thursday by the Religious Liberty Commission of Evangelical Fellowship of India (EFIRLC) and other Christian agencies.

The report titled as ‘Hate and Targeted Violence Against Christians In India’ illuminates the hate and targeted violence against the Christian community in 2020 with 95 incidents Uttar Pradesh once again heads the list of regions where the Christian minority has been targeted the most. It also noted that anti-conversion laws are now being used against the Muslim community too.

“ While Muslims were the main targets during the Corona-19 virus pandemic- which impacted India as much as it did the world- but Christians, especially pastors in rural areas of several states across the country, were victims of targeted violence, their congregational prayers disturbed, and places of worship attacked,” it stated.

The annual report running into 60 pages documented 327 cases, in which at least five people lost their lives, at least six Churches were burnt or demolished, and 26 incidents of social boycott were recorded.

And reminding that the numbers of cases recorded by RLC or any other agency are only indicative, and the actual numbers may be much larger.

“This is by no means an exhaustive list of incidents, many of which remain mostly unreported and unrecorded even in normal years because of the fear of victims of further atrocities if they stand up to their tormentors, and the victims in the rural settings, in particular, are hesitant or outright refuse to register cases of religious persecution because of fear”.

“Political excoriation, police impunity, and vigilante groups on their trail, marked the experience of many Christian communities in several parts of the country at the height of the COVID-19 spread.”

The religious freedom situation has to be seen in the context of an unbridled push for a majoritarian political framework in the country with laws tweaked against religious minorities in various ways, said Rev. Vijayesh Lal, National Director, EFIRLC who is one of authors of the report.

According to the report, “the months of March and October saw the highest number of incidents recorded in the country against Christians, with 39 and 37 incidents, respectively.

Uttar Pradesh once again heads the list of regions where the Christian minority has been targeted the most. RLC registered 95 incidents against the Christian community in the state in 2020.

Followed by Chhattisgarh with 55 incidents, most taking place in the tribal region of Bastar, now saturated by volunteers from Hindu right-wing organizations posted to “counter Christian influence.

In fact, there is a well-planned political campaign by these groups to ‘Hindutvaize’ tribal society. In Chhattisgarh, as in contiguous tribal regions, these groups face almost no political challenge. The Church has been present in the state and in the region for the last 200 years.

The push of the Hindu Right wing in Jharkhand is ominously similar to that of Chhattisgarh and has resulted in violence and social boycott of the Christians. Jharkhand and Madhya Pradesh registered 28 and 25 incidents, respectively.

Tamil Nadu in south India had 23 incidents. The state had the second largest number of cases in 2019, registering 60 incidents of some sort of violent action against the Christian community. It is the fifth highest in 2020”.

The report particularly slammed the anti-conversion laws being enacted by the BJP ruled states underscoring those now these are also being used against Muslims.

“Once targeting only Christians, they are now armed also against Muslims in the guise of curbing ‘Love Jihad’. This is an Islamophobic term coined some years ago to demonise marriages between Muslim men and non-Muslim women, particularly those belonging to the Hindu upper castes. The laws ostensibly punish forced or fraudulent religious conversions. But in practice, they are used to criminalise all conversions, especially in non-urban settings,” the report says.

“The most alarming development has been the expansion and scope of the notorious Freedom of Religion Acts, which are popularly known as the anti-conversion laws, earlier enforced in 7 states, to many more states ruled by the Bharatiya Janata Party”.

“Christian activists fear that the expanding footprint of the anti-conversion laws bring a step closer the BJP’s manifesto promising a nation-wide law to check evangelisation by “missionaries”, a term designed to impute western conspiracy to Christianise Dalits, Tribals and others in rural areas, small towns and urban slums. This, together with the accusation of Islamic population explosion because of the high birth rate, feeds the orchestrated rhetoric that the Hindu population will become a minority which underpins electoral propaganda in India,” the report underlines.

As a result of the anti-conversion laws, religious minorities can now be targeted by just about anyone, especially vigilante groups many of whom are complicit in the mob violence of earlier years in campaigns against beef and the slaughter of cows, and moreover, this law places the burden of proof on the person who has been accused of conversion, it stated.

While the rulings by High Courts that adult men and women have the freedom to choose their partners have had no impact.

It further noted that the Christian community wherever it is in small numbers remains fearful and legal literacy is grossly inadequate; the police almost as a rule do not want to register cases.

“Even if a case is registered by the police, the assailants seldom face prosecution in a court of law. On the other hand, the complainant runs the risk of retributive action”.

The report concludes that “The national [federal] government and states governed by Mr Modi’s Bharatiya Janata Party were accused of using the environment of fear of the virus and of police action, to curb freedom of expression, and protest. Several state governments and senior members of the ruling party were named for fomenting targeted hate that often led to violence against religious minorities”.

The Religious Liberty Commission urged the Government of India and the respective State Governments named in the report to ensure the rule of law and the security of religious minorities in India.

“We especially appeal to the State Governments of Uttar Pradesh, Chhattisgarh, Jharkhand and Madhya Pradesh to deal stringently with the various right-wing organizations operating in these states whose primary agenda is to create an atmosphere of fear among the Christian community and other religious minorities”.