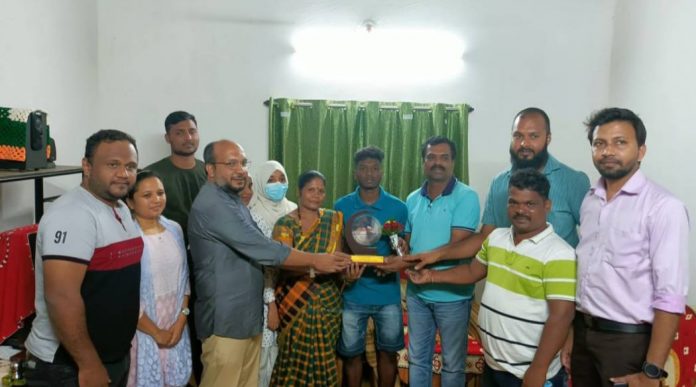 Unfortunately the elder brother,  drowned. However Sahil managed to pull out the two brothers from the river.

On Tuesday three brothers Irfan , Imran and Rehan went to river side for swimming but due to flow of water they were dragged away  into the  deep water.

According to Sahil, her mother Ranjana Lad and sister Shraddha Lad who were washing clothes at the river site saw these three brothers drowning. “They came running and told me that due to strong current the three brothers went along with the flow into deep water and were drowning. Myself and my uncle Sagar Lad ventured into the river and started a search operation” said Sahil who is studying in class XII at Government Higher Secondary School Valpoi.  He further told that after 10 minutes he managed to bring out the 10 year old who was in a semi-unconscious state and gave him first aid and later a local shifted him to CHC Valpoi on his vehicle.  “Again I went and started searching. I saw a second brother who was holding the branches in the deep water. I swam and brought him safely to the bank of the river and ventured again to continue the search operation but sadly, I found the floating body deep into water which I fished out” expressed Sahil in grief.

“Unfortunately, the elder brother (Irfan )feared the drowning was out of Sahil’s range or he could have saved him too” said an eyewitness who later took the children to Community Health Centre Valpoi, where eldest brother declared dead and second on was sent to Goa medical College hospital for further treatment where he recovered.

Narrating the sad incident, Sahil said “I felt sad and unfortunate when I saw the floating body of the child. Though I manage to save the other two but in the entire episode one life we could not save”.

People of Valpoi praised his act of bravery and appreciated him for his selfless act which saved two children.

At one instance there was grief spread in Valpoi on Tuesday as a 16 year old boy feared drowned but at the same time people were appreciating the selfless act of Sahil Lad for his bravery.

During the occasion SPS president Uday Sawant said, Sahil is one of the unsung heroes as he rescued two children in the age group of 10 to 13 years old from drowning in a river without knowing their caste or creed,credit goes to his mother as well who sent her son to save someone’s sons.

Local council member Sarfaraz Sayed stressed on awarding Sahil they said this act of bravery needs to be recognized at the proper platform. “He jumped into the deep river, risking his own life, to save drowning children.

Speaking to Muslim Mirror Phoenix Association president Abdullah Khan say “He is a  courageous boy who dared to dive into the deep river to bring back these drowning children from the brink of death”.

“He should be appreciated for this selfless and courageous act and we will try to send his name to the central government through proper channel for bravery award”, added Abdullah.

Sahil’s has two brothers and one sister, his father Diso Laad works in the Government hospital and mother is a housewife.