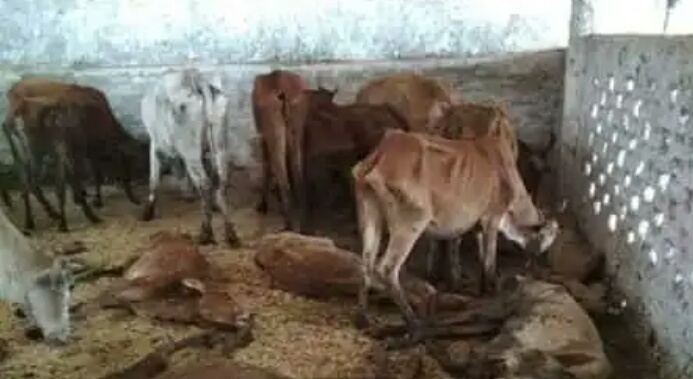 New Delhi:  Exposing the Bharatiya Janata Party’s hollow ‘cow prem’, Aam Aadmi Party on Thursday said that about 25,000 cows in the National Capital Delhi are suffering due to scarcity of fodder. It alleged a huge fodder scam in the Municipal Corporation of Delhi (MCD) as the BJP-ruled  all the three civic bodies did not pay a single rupee to  the cow shelters in the last 3 years,  a total  comes around  Rs.300 million.

There is a pending Rs 300 million from the BJP-ruled MCDs while the AAP-led government has paid its share amount to the care-takers of cow shelter, Pathak said.

The care- takers of cow shelters have threatened to let off the cows on the roads if the money is not paid by MCDs.   There are four cow- shelters in the city which feed around 25,000 cows and their expenditure is borne by the MCDs.  Besides these cattle, many more cows and bulls   wander in the streets and roads of the city which has become a great nuisance for the people.

AAP leader said that the COVID pandemic has devastated the lives of the citizens of Delhi and similarly, this has also brought a lot of hardships for the animals.

It has come to our notice that only 2-3 day fodders left for these cows as there is huge scarcity of the feed because of fund crunch, he said and blamed the BJP for this.

Referring to the mob-lynching incidents, he said BJP and RSS always use cow for their divisive politics but neglect this poor animal.

“The BJP is responsible in Delhi for this negligence of the cows. The party fights and harasses people and asks for votes in the name of cows. But, when it comes to Delhi and the municipal corporations of Delhi, they remain silent.”

According to the rules, the Delhi government pays Rs.20 per day per cow and the same money should be given by the BJP-ruled MCDs. This amounts to Rs 10-11 crores for the Delhi Government per year and the same amount should be paid by the MCDs of Delhi, which are under the BJP.

“The BJP has embezzled the money meant for the odder of cows on their corruption. We also knew that the civic bodies controlled by the BJP take money for construction of houses, for cleaning of drains, for cleaning of streets and other works,” he further alleged.

However, we never thought that the BJP will also use the money for the cows for its own corruption,” he said.