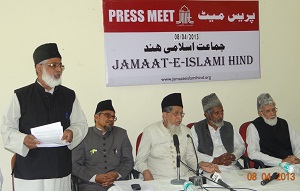 New Delhi, April 8: Jamaat-e-Islami Hind has demanded the Union Government to make access to food and health facility a right of all citizens of the country without any discrimination. While welcoming the National Food Security Bill 2013 in principle, Jamaat demanded the government to remove the shortcomings to make the law effective.

Addressing pressmen today at Jamaat headquarters, Ameer (National President) of Jamaat-e-Islami Hind Maulana Syed Jalaluddin Umari today demanded the government that this law should not be left at the mercy of states to implement; rather the central government should take responsibility to implement it in the entire country. He also demanded passage of the bill in the current Budget session of the Parliament.

“Every person in the country should have a right to access food and health facilities,” said Maulana Umari. He was briefing media persons about the resolutions passed at the end of the four-day session of Jamaat’s Central Council of Representatives. The council comprising 148 members from across the country took up food security issue prominently.

“In a country where on the one hand there is a considerable increase in production of food grains and go-downs prove insufficient while on the other hand a big chunk of population in the country is victim of starvation, such a law is an inevitable need,” the council said in its resolution on Food Security Bill.

Highlighting various discrepancies in the bill, Jamaat said the bill is still below the expectations of the people.

“The Government has not accepted all citizens’ right to food as yet and even after the enactment of this law a big chunk of the population in the country would remain deprived of the fundamental right to food. Thus the Government is practising evasion in determining the Below Poverty Line (BPL) and its proper standards. Even in the latest draft the citizens of the country have been divided into privileged and general categories. According to it, a total 35 kilograms of food grains will be given to only 2.5 crore (25 million) viz. 10% families. This is a very small part of the poor population of the country. Besides, 57% population has been ensured 5 kgs food grains each – which is not sufficient from any angle. According to acknowledged standards, an adult requires 14 kgs of food grains and a child 7 kgs every month. The present offer of 5 kgs food grains each is not enough to meet the need even of a child. While 33% population of the country has been kept out of the purview of this law. It is feared that a large number of poor population will remain deprived of the benefits of this law as long as all the citizens are not ensured 35 kgs of food grains every month.”

The Bill has no provision for the fulfillment of food requirements of the deprived, homeless, mentally and physically handicapped and waifs. For such persons the availability of food grains on the basis of ration card or Aadhar card is not possible nor can they benefit from these grains.

“The way States have been granted freedom of phased implementation and the way a deadline for total implementation of right to food has been evaded show that this law will be put beneath the carpet of bureaucracy in many States. The need is that all the provisions of the proposed law are implemented with a clear deadline and fixed plan in all States.”

The council also passed resolutions on arrest of Muslim youths in terror cases, communal violence bill and violence in Myanmar and Bangladesh.

While welcoming the statement of Union Home Minister about setting up fast track courts for cases related to terrorism, Jamaat condemned the move of the central government to establish National Counter Terrorism Centre (NCTC), which had been strongly opposed by human rights organisations and certain state governments. It also demanded repeal of UAPA law, compensation to persons acquitted by courts in terror cases, action on Nimesh Commission Report and withdrawal of false cases levelled against Khalid Mujahid and Tariq Qasmi and establishment of a Judicial Commission for high level enquiry into all big cases of terrorism.