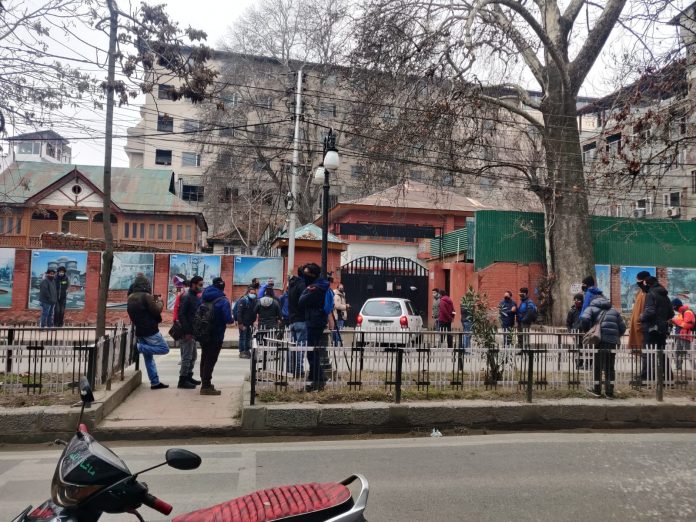 The Kashmir Press Club was taken over by J&K Government, on Monday, after a group of journalists took over the valley’s largest media body.

“In view of the unpleasant developments and dissensions between various groups of journalists, it has been decided that the allotment of the premises at Polo View in view of the now deregistered Kashmir Press Club be cancelled and control of land and buildings situated at Polo View Srinagar which belongs to the Estates Department be reverted back to the said Department,” the J&K government said in a presser.

The government also said that it “is committed to a free and fair press and believes that journalists are entitled to all facilities, including a place for professional, educational, social, cultural, recreational and welfare activities.”

The move is being seen as an attempt to muzzle press in the valley. Various journalists from the valley took to Twitter and criticised the shutting down of the club.

“August 5, 2019 is not mere a date, but an act which is being implemented and normalised in Kashmir on a daily basis. Ending Kashmir Press Club for merely being a space of safety and collective thinking for scribes is unfortunate and saddening, threatening too,” Peerzada Ashiq of The Hindu tweeted.

Journalist and author, Gowhar Geelani wrote that “Kashmir’s independent media body is being forcibly captured by a handful backed by forces.”

These people by the roadside are hardworking journalists of Kashmir.
They have been literally thrown out of Press Club, place they would sit at, sip coffee and tirelessly report the facts on the ground. Most affected are the freelancers—who are doing the best journalism here. pic.twitter.com/2AJwaQGCxu

On Saturday, a group of journalists including M Saleem Pandit, of the Times of India, Zulfikar Majid of the Deccan Herald and Arshad Rasool, editor of a local Urdu newspaper, Daily Gadyal barged into the premises of Kashmir Press Club (KPC) along with paramilitary forces and police personnel. The trio announced M Saleem Pandit as the president, Majid as general secretary, and Rasool as treasurer of the club.

Kashmir based journalist bodies, on Saturday, denounced the forcible takeover of Kashmir Press Club by some “disgruntled” journalists and thereafter appointing themselves as “interim” body of the Club.

“Majority of the Kashmir-based journalists has expressed anguish over the illegal and arbitrary takeover of the Kashmir Press Club by some journalists with open support from the local administration. On 15 January, the day when the administration had declared weekend lockdown in view of Covid surge, some journalists barged into the club office and forcibly took control of the club by keeping the office members hostage. Large number of police and paramilitary personnel were deployed beforehand for this highly condemnable and completely illegal move,” the journalist bodies said.

“Press Club of India is deeply concerned with the developments with Kashmir Press Club. We demand that the democratic process of holding elections be allowed in a peaceful manner. We appeal to Hon Jammu and Kashmir LG Manoj Sinha to look into the matter and facilitate elections,” PCI said in a tweet.

The Editors Guild of India in a statement said, “The Guild demands immediate restoration of status quo before this hostile takeover, announcement of elections to appoint a new management body and strict prohibitions on any armed forces from interfering with the functioning of the Club, without due legal sanction.”

“Even more disturbingly, the State police entered the premises without any due warrant or paperwork, and have, therefore, been brazenly complicit in this coup, in which a group of people have become self-declared management of the Club. This violation of the sanctity of the Club by the police and the local administration is a manifestation of the continuing trend to smother press freedom in the State,” the statement read.

“The MPC also deplores the Jammu & Kashmir administration for scuttling the Club’s election process the previous day, Friday, 14th January, by holding in abeyance’ the registration of the Kashmir Club, which is registered under the Societies Act, 1860,” it said in a statement.

Former chief minister of the erstwhile state, Mehbooba Mufti, in a tweet,said: “Today’s state-sponsored coup at KPC would put the worst dictators to shame. State agencies here are too busy overthrowing elected bodies & firing govt employees instead of discharging their actual duties. Shame on those who aided & facilitated this coup against their own fraternity.”