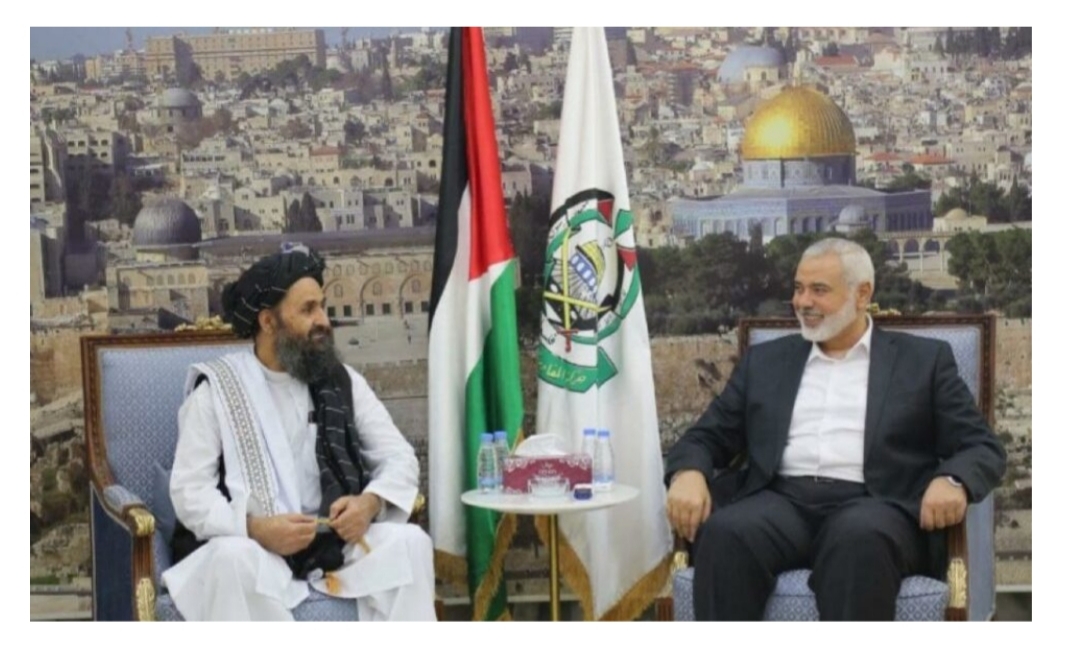 There is a world-wide media glare around the Afghan-Taliban (AT) on the overtake of Afghanistan government of Ashraf Ghani, whom the Afghanistan embassy in Tajikistan want to be ‘arrested’ for stealing public property, tells Forbes on August 18 1 , and has sought Interpol intervention for it. Ashraf Ghani will meet his much awaited fate, but the inglorious chaos, he has left Afghanistan is quite contrary to how his own daughter Mariam Ghani, is leading a luxurious fashionable lifestyle as a ‘Brooklyn cliché’ in New York. Such have been the stooges US could all create after plundering Afghanistan for 20 years and their abominable departure.

It was surely the fact that Suhail Shaheen, the international spokesperson of AT, was taken unawares when he was put to a ‘Jewish Question’, in the otherwise series of interviews he has been conducting in the past around one month. There is already a heat generated all across the world on AT taking to reins of power and it added more squabbling to it , when Palestine media, released pictures of AT head Mulla Abdul Ghani Baradar with Hamas politburo Chief Ismail Haniyeh. Hamas is the Palestinian resistance group against Israel. The Israel media was agog about the timing of the release of the picture! ‘According to Palestinian sources privy to the matter, the meeting took place in the Qatari capital of Doha shortly after Operation Guardian of the Walls, the recent 11-day conflict between Israel and Hamas. In the meeting, Baradar reportedly praised Hamas and its leaders “for their steadfast opposition to the Zionist enemy and the long-awaited victory’, reported IsraelHayom on August 17 2.

A controversy has now broken-out as to ‘how’ Suhail Shaheen, could speak to a media-house from Israel, a country which AT does not recognize. There are reports, all over Israel on the stated controversy, as The Jerusalem Post on August 18 3 reported, ‘Taliban deny they knowingly gave interview to Israeli TV after the interview was broadcast on Israel’s KAN station. “I do many interviews with journalists every day after the falling of provincial centers of Afghanistan and the capital, Kabul, to the Islamic Emirate. Some journalists may be masquerading, but I haven’t done an interview with anyone introducing himself [that] he is from an Israeli media,” wrote Shaheen after news of the interview broke. The interview with Roi Kais asked how the Taliban had changed since 9/11. The Taliban spokesman said, “We will not allow our land to be used against other countries.”

It may be mentioned here, that even the Israel media is reporting that the reporter from Kan Studio, did not specify he was calling from Israel TV. In the said interview Suhail Shaheen is said to have stated that ‘Last Afghan Jew will be safe’. What would merit attention is the limelight thrown on Zebulon Simantov, the Afghanistan born Jew living, who has refused to leave his home. An elaborate story published on Times on Israel on August 17 4 confirmed that the ‘Islamist militia group will respect the rights of minorities in Afghanistan, including those of the country’s last Jew . Roi Kais, the reporter from Kan state TV who spoke by phone with Shaheen, identified the name of the station, but did not specify that it was an Israeli broadcaster. “We identified ourselves as the Kan news channel, but we didn’t stress that we are an Israeli media outlet,” the reporter acknowledged in the item. “Which TV are you?” Shaheen asked. “Kan news. Kan news,” came the reply. Shaheen later acknowledged he had no idea of the Jew living in Afghanistan.

Zebulon wife, according to the same report, is a ‘Jew from Tajikistan, and their two daughters, have lived in Israel since 1998. But Simantov has stayed in his native Afghanistan to tend to its lone synagogue. He is ‘a carpet and jewelry seller, was born in the Afghan city of Herat, which decades ago was home to hundreds of Jews. He eventually moved to Kabul, but fled to Tajikistan in 1992 before returning to the capital city’.

The accidental-interview which caught Shaheen ‘by -way-of-deception’, however, has been successful into giving a message to the world that Israel is ‘protective’ of the last Jew, as Kan News is a proponent of Israeli Public Broadcasting Corporation which is aired in Hebrew. This makes it quite obscure and poorly known in the world of media. This led to its actual advantage, particularly when, it did not divulge, the country it belonged to. The reporter typically spoke in English. Kan News should have informed its dateline in the first place. Particularly in the wake of the prevalent thousands of social-media outlets in every part of the world today. What a shabby unethical show by any media standards.

Israel has its own priorities and Shaheen was put to questions regarding Afghan-Taliban getting kudos from Hamas and the bonhomie between the two, to which Shaheen replied that Hamas has no specific role in Afghanistan. The reporter’s question towards the last surviving Jew, was surely, to have pressed an alarm-bell for Shaheen, as all he was being subjected- to were questions pertaining to minorities i.e. Hindus, Sikhs, women and the Shariah law, and the ‘Jewish-Question’, just propped-up in its suddenness! Shaheen had to issue a clarification that he had no clue that Kan News belonged to Israel. It is however learnt from Akali Dal leader, on NDTV on August 19 5, that Taliban had come to Kabul Gurudwara and assured safety to Hindus and Sikhs of Afghanistan.

As the situation rapidly escalates in Afghanistan, it squares to a very obvious question, which hovers towards the fate of the at least officially claimed 15,000 US citizens still in Afghanistan, as per the report published in Fox News on August 19 6 whom the US President Joseph Biden wants to come back before the August 31 deadline. But, the still bigger question is also about those US citizens, who are also Jews, and sometime Urdu/Pashto speaking ‘Blackwaters’ private mercenaries, meant to carry-out the private-war inside Afghanistan, long after US draws its final curtain! A report in Eurasian Times on November 20, 2020 7 had long expressed such fears that, ‘US troops will be replaced by notorious ‘Blackwater Mercenaries’ in Afghanistan when Biden takes over’.

Perhaps a lot is still to unfold in the Afghanistan drama.

Taliban under fire over not reopening high schools for Afghan girls