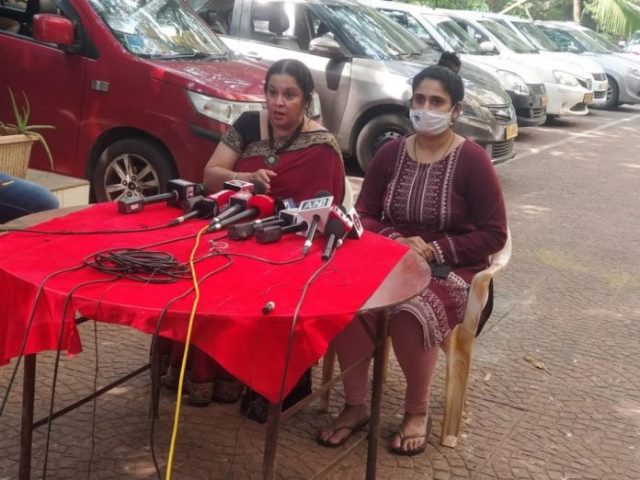 Welcoming the arrest of Republic TV owner and Chief Editor Arnab Goswami, the family of the late architect Anvay Naik on Wednesday demanded to know why he (Goswami) was accorded “privileged treatment” by the police earlier.

Naik’s widow Akshata and daughter Adnya addressed the media after Goswami was nabbed from his Worli home and whisked off to Alibaug by a team of Mumbai and Raigad Police earlier.

The wife and daughter categorically denied that the late Naik had been made any payments from Goswami for constructing the TV channel’s studio and claimed that the entire probe was done shoddily by the earlier police team.

Goswami’s dramatic arrest came after the Maharashtra Police reopened the case of the double-suicide of an architect Anvay Naik, 53, and his mother Kumud Naik, in her 70s – both directors of Concorde Designs Pvt. Ltd.

The mother and son were found hanging at their Alibaug bungalow on May 5, 2018, leaving behind a suicide note, saying they resorted to the extreme step owing to unpaid dues from three companies, including Goswami’s Republic TV (Rs 83 lakh), Feroz Shaikh of IcastX/Skimedia (Rs 4 crore), and Niteish Sarda of Smartworks (Rs 55 lakh).

They said that after the suicide of Naik and his mother Kumud, the family had made pleas for help to many people including Prime Minister Narendra Modi, Mumbai Police, Cyber Cell, Crime Branch, Maharashtra Police, Thane Police, Raigad Police and others.

“We have been under constant pressures. We were continuously threatened. Unknown persons used to come and sit at our home We have been shadowed by strange persons Even Arnab Goswami had said (then) that he would not pay the dues,” said Akshata and Adnya.

“Goswami and the other two accused (Shaikh and Sarda) are responsible for the suicide of my father and grandmother Yet, Goswami was given ‘privileged treatment’ by recording his statement on a police computer instead of going to the Raigad Police,” Adnya said.

They said that the Raigad Police chief Anil Paraskar kept assuring them that “we shall be called to the court” and they had no knowledge that the case was hastily ‘closed’ on the same day as the police filed the closure report.

“He was continuously threatening my father He threatened to ruin his and may career. Despite all this, why were the three accused persons not arrested? These three accused and the others who supported them in this whole thing” demanded Adnya.

Akshata said it was a very poignant moment that Goswami’s arrest came on ‘Karva Chauth’ day (Nov. 4) since she had been in love with her late husband since her school days.

“We are hopeful of “getting justice” now, even if any other agency like CBI takes it over… Goswami is a very influential person… We appeal to all not to politicise the issue,” the mother-daughter urged.

Akshata and Adnya fervently appealed to the masses for support in their nearly three-year long fight for justice to Anvay Naik just as people had rallied together after the death of actor Sushant Singh Rajput.