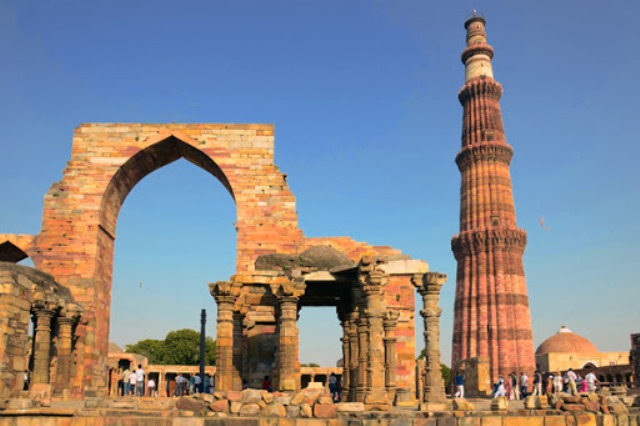 New Delhi : A petition has been filed in the Saket court in New Delhi alleging that the 12th century Quwwat-ul-Islam Mosque was built in place of a temple complex comprising as many as 27 temples. The court was urged to restore the alleged temples and permit worship of Hindu and Jain deities there.

The Petitioners have alleged 27 Hindu and Jain temples were dismantled, desecrated and damaged under the command of Mughal emperor Qutub-Din-Aibak, who raised some construction at the same very place of temples naming it as, ‘Quwwat-Ul-Islam Mosque’.

“On the walls, pillars and roof of the existing building the images of Gods and Goddess including other religious/ pious Hindu symbols and deities like Shri Ganesh, Vishnu, Yaksha, Yakshini, Dwarpal, Lord Parshvanath, Lord Mahavir, Natraj and symbols like Mangal Kalash, Shankh (Conch), Gada, Lotus motifs, Shri Yantra, Temple Bells and Sacred Lotus etc. are engraved. The 9 Structural inner and outer outlook of the building complex symbolizes with ancient Hindu and Jain temple Architecture. The corridor is completely of vedic style having rectangular galleries with holy symbol engraved pillars,” the Petitioner has contended.

It is pointed out that the Petitioner’s version is also supported by a short history displayed by the Archaeological Survey of India (ASI), which narrates that the 27 temples were demolished and reusing the materials of demolished temples the construction of Quwwat-ul-Islam Mosque was raised.

It further sought issuance of mandatory injunction directing the Central Government to create a trust, according to Trust Act 1882, and to hand over the management and administration of the temple complex situated within the area of Qutub Complex.

It is significant to note that the Quwwat-Ul-Islam Mosque  was declared to be a monument of National importance by Central Government and is presently being maintained by the ASI as per provision of the Ancient monuments and Archaeological Sites and Remains Act, 1958.

The matter came up for hearing on Tuesday before Civil Judge Neha Sharma who fixed the next date of hearing on December 24.