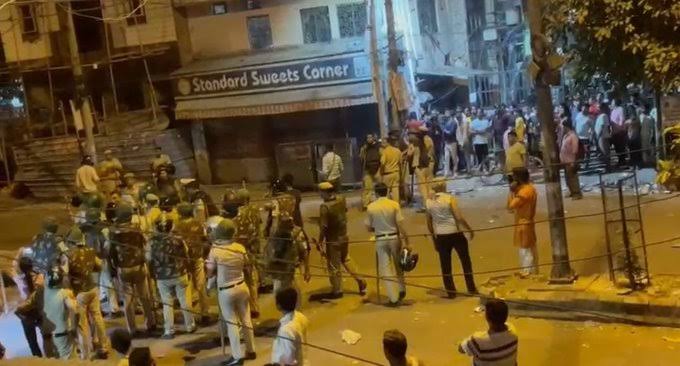 New Delhi : The central agencies are trying to establish whether Delhi’s Jahangirpuri violence has any links with the recent violent incidents in Karauli and Khargone in Rajasthan and Madhya Pradesh respectively during the Ram Navami processions.

According to sources in the central security set up, the probing agencies are examining all aspects of the Jahangirpuri incident and ascertaining whether it was local in nature or planned under a conspiracy.

The modus operandi of the recent brawls are very similar indicating a larger conspiracy to disturb the peace and harmony in the country. They also said that the recent alleged attacks on the religious processions have been noticed in places where the both communities have been living since a long time.

The last few weeks saw communal tension in parts of the country. Communal riots broke out in several states during the Ram Navami in Rajasthan’s Karauli, Madhya Pradesh’s Khargone, Gujarat, Jharkhand and in some parts of West Bengal.

On April 2, in Rajasthan’s Karauli, the violence started when the procession of a few Hindu organisations on the occasion of ‘Nav Samvatsar’, the first day of Hindu New Year was attacked with stones while passing through a Muslim-dominated neighbourhood.

Over 42 people were reportedly injured when stones were pelted at a motorcycle rally passing through a minority dominated area after the brawl between the two communities, shops and vehicles were set on fire.

Similar incident occurred in MP’s Khargone on the occasion of Ram Navami this year. In the religious procession near the Talab Chowk area of Jama Masjid in the city, clashes erupted between the two communities where they were allegedly provoked by the people coming out from the local mosque after prayers and the stones were pelted from both sides.

The Jahangirpuri incident occurred in the similar manner wherein the both communities brandished weapons and iron rods at each other and stones were also pelted in the same manner, the officials added.

Though, the ‘Shobha Yatra’ was taken out with the Delhi Police’s permission, but the number of police personnel deployed was not adequate to handle the incident which unfortunately happened on Saturday evening, the locals said in the Jahangirpuri.

Meanwhile, the Delhi Police has arrested 14 accused in this case, including the alleged conspirator and main accused Ansar.