New Delhi: A delegation  of All India Lawyers Council (AILC) led  by Advocate Sharfuddin Ahmad, the secretary general of the Council visited the family of three Muslims who were killed by a Hindu mob in Samastipur district of Bihar to study and make analysis of the aftermath and affects of the communal engineering of Sangh on  Muslim population.

Three persons, one woman and two men were killed by a Hindu mob  on 21 June in Adharpur area of Samastipur district.

Sarwan Yadav was shot dead before dawn at the tea stall in the village. Noboy could see the killer due to invisibility. 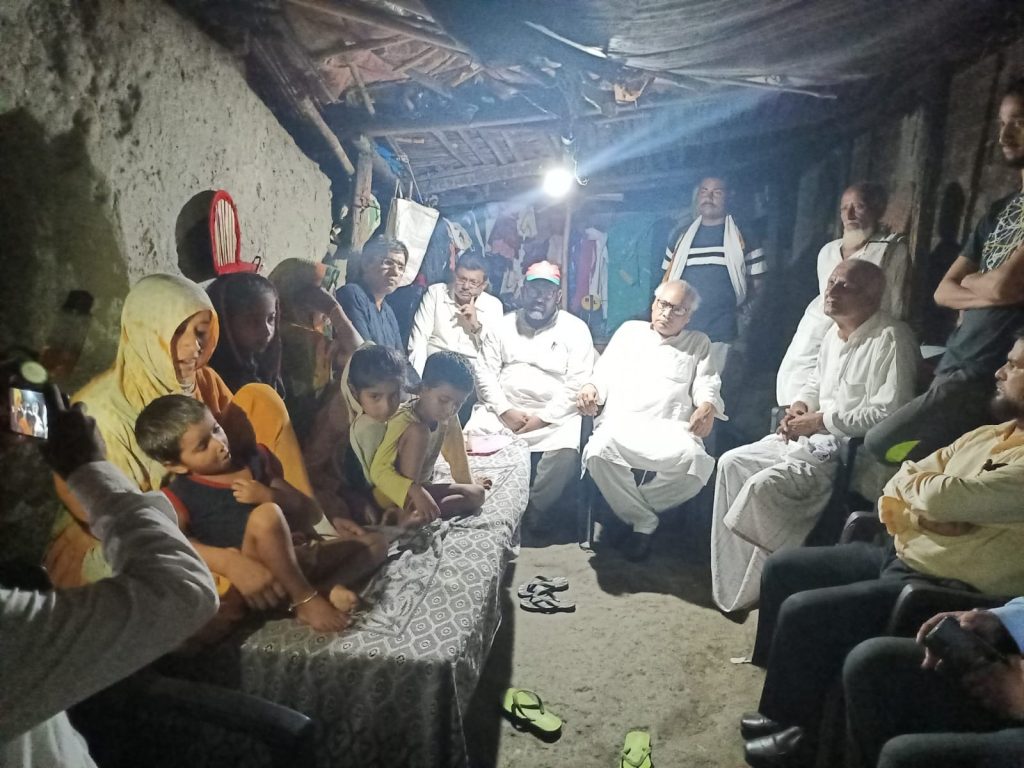 There happened, as reported, a recent feud between Sarwan and Hasnain on account of the laying of public road leading in front of house of Sarwan. A day before the serial killings, Sarwan Yadav used JCB machine to forcibly remove the part of the construction of the raised road near his house that had been completed by Hasnain under the contract with government authorities.There were reportedly amicable relations between both the persons before the dispute arisen regarding the road.

Hasnain was a locally well known figure and also wielded influence in the village. He was sitting Deputy Mukhia and had been elected Mukhia twice earlier.

There are only seven houses of Muslims in the locality of Adharpur mostly close relatives of Hasnain. As the news of killing of Sarwan spread, people started gathering from the village and by 10 o’clock, an huge crowd of outsiders with saffron gamchas around necks had poured in and around the spot of occurrence from all around chanting communal and provocative slogans against Muslims.

It is reported that crowd was premeditated with plan and started indiscriminate attack on all the houses of Muslims. Mrs Sanowar Khatun, 45 years,the wife of Hasnain was forcibly pulled out from her house caught by hair.She was made bared of her all the clothes and nudely paraded in public.The woman was thereafter taken to an enclosure and repeatedly was sunk with her head into water.Eye witnesses reveal that her breast were cut off with sharp weapon and heavenly tortured till her death. The mob continued the violence for whole of the day without any intervention of the Police and before evening the indoctrinated goons had set to fire,looted and razed to ground all seven houses of Muslims killing a woman and man and greveously injuring a senior citizen.

Anwar, 30 , a nephew of Hasnain was caught by the violent mob and he was also brutely killed on the spot applying all the means of torture and indignity. The Muslm women including daughters of Hasnain, sneaked into the house of Pasi neighbour who in exceptional situations ensured their safety but the mob did not spare the infirm and aged father of Hasnain, causing him griveous and deadly injuries.

The police shifted him in unconscious state to the hospital where after several days, he could be restored to the consciousness.
The area has recently witneesed visible presence of Bajrang Dal. They hover over the streets and roads with saffron gamchas to make their presence felt and openly engineer hatred against Muslims with impunity.

SDPI had organised very huge protests against the injustice, engineered and perpetuated on sheer and collective hate against against Muslims.Three culprits have been arrested by the police but the leading among them are still not brought to book due to political pressures

The continuing sore of pathetic incident is the family of Anwar left after the death of only bread earner for entire famiy. Deceased Anwar had left behind him an young wife Nusrat Jahan and four minor children,three daughters aged 9,7,5 and only son 3 years old. They have been given refuge to a destitute family of father in law of Anwar The family doesn’t have even a permanent roof over the head.The essential articles for household or even clothes for children are still beyond the reach of the bereaved family.They urgently need compassionate aid from the community.

It is unfortunate that the Nitish government has not provided any support to the diseased family, said Ahmad.

One thought on “Samastipur: AILC delegation meets family of two Muslims who were killed by mob”