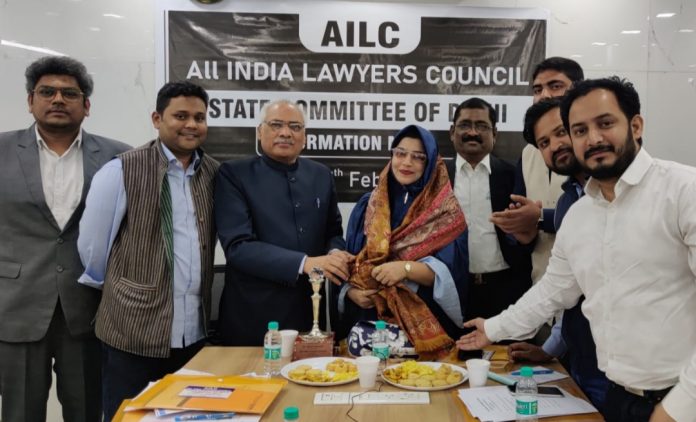 New Delhi:  The increasing politico-media complex, backed by corporates, has posed serious threats to the India’s constitutional values, triggering a sense of alienation among weaks and marginalized sections towards State, observed legal luminaries at a function organized on February 27 by the All India Lawyers Council (AILC) on its second foundation day in New Delhi.

Established on February 8 two years ago, the lawyers body AILC renewed its commitment in the impressive gathering at head office  where several former higher court judges, jurists and lawyers shared their concerns on the current situation where judiciary is faced with accusation of siding with powerful people.

Justice (Retd) Ravindra Singh, Allahabad High Court, has been its first president.  Since then, it has spread its wings in as many as 10 of the country’s largest states.

Dr. Battul Hamid, Principal of VIVA College of Law in Virar, Mumbai, was invited as the commemorating event’s chief guest. Dr. Hamid gave an energising speech. She emphasised that the only way India can exist as a country is if it follows the Constitution to the letter. She stated that the principles of liberty, fraternity, equality, and justice inherent in the Constitution’s Preamble are the cornerstone of every constitutional democracy and should be adhered to religiously. She also shed light on the basic features of the Constitution in the given context.

In his keynote address, AILC secretary general, Advo Sharfuddin Ahmad pointed out that the State has been turned into an instrument in the hands of capitalistic forces; the media has been reduced to a propaganda machine promoting the government’s anti-people programmes and hostility among various sections, particularly between Hindus and Muslims.  Dissension and opposition to government policies and programmes are labelled as “anti-national,” he added.

The AILC’s activities report was presented by Adil Sharfuddin, advocate of the Supreme Court of India, while the program was chaired by Advo Sevvilamparithi (Tamilnadu).

He pointed out that the organization is gaining credibility as more and more lawyers and former judges are joining the ranks of AILC. Former Chief Justice at the Calcutta High, Justice Debasish Kar Gupta was elected as president of the West Bengal unit while Justice Abhay Mahadeo Thipsay, former judge of Bombay High Court, was elected Maharashtra unit of AILC.  Justice BG Kolse Patil, former judge of Bombay High Court has been the first vice president of the AILC.

Today, the challenge to all of our constitutional structures, including the judiciary, is unprecedented. It is imperative that constitutional ideals be safeguarded at all costs. In the backdrop, the AILC was born which has been making efforts to provide help to those who were the victims of state apparatus.  The AILC team visited the victims and their families and extended all possible help to them.  It collected data about the cases of hate crimes and communal violence. Lawyers are the Constitution’s foot warriors. The Constitution held the country together for 74 years. The nation would fail if the Constitution were to fall.

Very tough time ahead as hatred is increasing and history is being distorted: Justice Abhay Thipsay