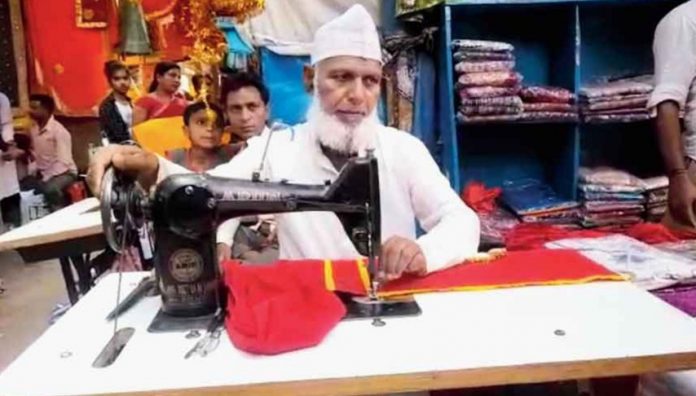 At a time when an economic boycott of Muslims is going on in Karnataka, Muslim tailors at Godown Market in Gaya, Bihar are busy stitching flags for the Ram Navami festival that falls on April 10.

The tradition of making Ram Navami flags by the Muslim tailors is centuries old and it remains untouched to date, even though the poisonous drive to hit the Muslim’s belly is the talk in the country.

Ram Navami is a spring festival that is celebrated as the birthday of Lord Rama. On this day, Hindus after performing pujas at home, flock to temples to celebrate this festival with great enthusiasm.

It’s for this celebration, that Muhammad Rashid 62, is pedaling his sewing machine in Godown Market Gaya stitching Ram Navami flags. Rashid who fasts in the holy month of Ramadan is working assiduously to complete the orders of Ram Navami flags as his customers are making a beeline at his shop in the thickly populated Godown Market.

Hundreds of flags, big and small, are kept neatly folded in Rashid’s small shop. Some are plain; some have golden frills and sequins, some bear pictures of Lord Hanuman, while many have “Jai Shri Ram” stitched on them.

Some of the flags are huge, used in processions or fixed atop temples; the smaller flags are meant to deck out homes.

Rashid who is stitching the flag since the age of 15 says my father and grandfather used to stitch Ram Navami flags and he is doing some learning from them.

Godown Market and its neighborhood is a manufacturing hub for Ram Navami flags in Bihar. The flags are known for their impeccable finish and are sent to districts across Bihar Jharkhand and eastern Uttar Pradesh districts.

Stitching of the Ram Navami flag begins a day after Holi and goes on to the first week of April when the festival day arrives.

‘The bulk orders are dispatched first, and then flags are stitched for individual buyers, Rashid said while sewing a flag.

Godown market is an oasis of communal harmony in an otherwise communally charged atmosphere in India. Here customers right now are flocking in the street, selecting the sewn flags while some sit with the tailors to get their flags stitched as per their specifications.

Well, this piece of India based on interfaith communal harmony thriving for centuries is now being eroded by divisive elements in the country. There are many communal souls who are assiduously working to rupture these are patches of the truth of interfaith dependence in the country.

This is the narrative of ‘Post-Truth India, The Brand New Republic.’ Will this narrative win the battle against the tried and tested narrative of ‘Unity in Diversity’, that remains to be seen?

Syed Ali Mujtaba is a journalist. His forthcoming book is ‘Post-Truth India, The Brand New Republic.’ He can be contacted at syedalimujtaba2007@gmail.com