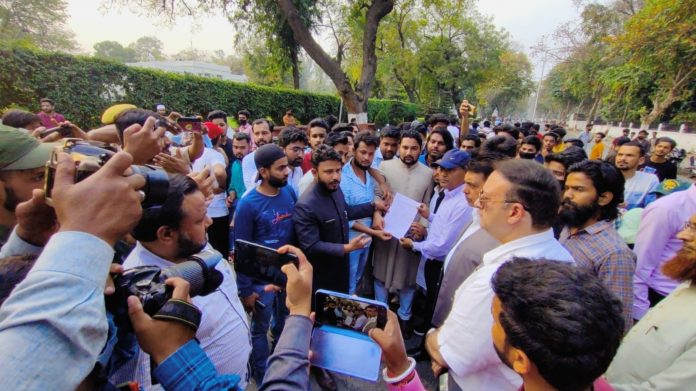 On March 21, several students of the Aligarh Muslim University today took out a protest march against the Hijab ban in Karnataka schools and colleges.

The students presented a memorandum to the President of India through the Aligarh Administration demanding the “protection of the rights of Muslims”.

“We the students of AMU, strongly oppose the Karnataka Government order and the Karnataka High Court judgment restraining Muslim girl students from wearing ‘hijab or headscarves’ in the schools and colleges. It creates a vague prohibition against clothes that disturb equality, integrity and public law and order. Such a prohibition makes no legal sense as it weakens the natural fabric of India as enshrined under the preamble of Indian Constitution.” the students said in the memorandum.

“Unity in diversity is one of the distinguishable features of India, being the largest democratic system in the world.” it read.

Zanib Hasan, a student leader, said that all citizens have the right to practice his religion and the government should not interfere in it.

“I request the President of India to protect the fundamental rights of Muslims.

Another student leader Abu Syed Dilwar Siddiqui said that they were not satisfied with the Karnataka High Court’s decision on Hijab as the “judgment has suspended Articles 21 and 25 of the Indian Constitution.”

Several student leaders at the campus said that the BJP wants to spread hatred among people by targeting minorities.

On March 15, Karnataka High Court upheld a state government order that had banned headscarves in classrooms by saying that the hijab is not “essential” to Islam.

The move faced widespread condemnation across the world.

On March 16, Muslim organisations across Karnataka had called bandh against protest against the ban imposed on wearing hijab in schools and colleges of Karnataka.

“By attacking Muslim women’s freedoms, Hindutva forces have found a quick and cheap means of demoralizing and invisibilizing the Muslim identity in India,” said Dr. Samina Salim, Associate Professor at University of Houston had said.

“The argument is to ‘liberate’ women from ‘regressive’ customs, but at the same time, their freedom is encroached by telling these women what they can or cannot wear, while also denying them the freedom to practice their faith and the right to seek education,” added Dr. Salim.

Communist Party of India (Marxist) had called the verdict contrary to constitutional guarantees of equality.

Hijab decision of Karnataka HC is contrary to constitutional guarantees of equality. Judiciary is not expected to uphold discriminatory policies. Wearing a scarf to cover one’s head has never been considered a violation of uniform. Justice from Supreme Court urgently required.

Fresh pleas have now been made to the Supreme Court of India, which, on March 16, refused to entertain them before Holi.

Boris Johnson urged to speak out against EU hijab ban