As this new year begins, there are fresh clouds of war hovering between Iran and Israel. It was in September 2022 when France, Germany and England had gathered in-chorus against Iran on the nuclear-deal, which obviously was lauded by Israel.  The ‘triplets’ had expressed fears of an Iranian nuclear bomb on the horizon, and in the same mouthful had brought into focus, Iran’s support to Hezbulllah, Hamas and Islamic Jehad, Palestinian resistance groups, against Israel. This gave the much needed impetus to Israel, as Israel at any cost, does not want the nuclear deal to happen at all!

Israel’s stand, from the day one, had been a big NO to a nuclear Iran and has always vowed to go-to-any- extent to thwart Iran from acquiring nuclear weapons. The 2015 nuclear-deal of Iran with US, which was annulled by outgoing US President Donald Trump, has always seen as ‘flawed’ by Israel, as it hinges on an argument that if the nuclear-deal gets successful, it  would bring relief from sanctions on Iran, which have been slapped anew in the wake of Iran’s supply of drones to Russia in its war against Ukraine, and that the same revenue from the relief of sanctions on Iran, would be funneled to bolster groups from Palestine against Israel. Something which the ‘triplets’ have also highlighted.

Israel has repeatedly threatened a military-action against Iran in case ‘diplomacy fails’ and if the Iranian nuclear programme goes beyond the civilian-justification. There have been reports that Iran is engaged into ramping-up its Uranium enrichment programme. The non-proliferation experts opine that Iran has enough 60%-enriched Uranium necessary for a nuclear bomb. This is despite that fact that Israel is home to the largest nuclear stockpiles in the whole of West Asia, and that Israel has always had a cutting-edge against all its neighbours, due to the unstinted support of US, in all these last seventy years.

Israeli army is now on record to announce that it is ready to hit Iran if ordered by its political establishment. This has come within a fortnight when Israel had claimed to have hit an Iranian arms convoy near Syria-Iraq border, in which around 10 people had died, as per Times of Israel 1. Israel Defence Chief Aviv Kohavi  hailed the ‘advanced capabilities’ that enabled pilots to evade missile defenses and hit ‘truck number 8’ in 25-vehicle procession in early November’. Syrian media claimed it was a fuel-tanker, while Iran is also claimed to have hit an Israeli oil tanker off the coast of Oman in November 2022. Interestingly, this Israeli stand had come after Israel and US had conducted one of the largest air drills, informed The Jerusalem Post 2 simulating a strike on the nuclear sites of Iran. The joint-drills over Mediterranean Sea and Israel consisted of long-range flights to enable Israeli pilots to reach Iran. It also included refuelers and fighter jets from both US and Israel. This made clear that if the strike would-come, it would include US as an active partner too! This will obviously make Russia join the fray from the Iranian side. Russia and Iran are traditional partners. Moreover, Iran has openly participated in the Ukrainian war from the Russian side too. Kohavi had visited Washington in November and is set to retire next month.

The joint-drills have given the much desired push to Israel. Israel claims that now its striking capabilities have improved incredibly, which is a signal that US fighter jets in fact are to pounce-upon in Mission-Iran.  Israel and Iran apart from being in a race for supremacy in the Gulf have also been at loggerheads with each other in Syria too, where Iran supports Basshar Al Asad regime from the past 11 years, along with Russian support. Israel-Iran conflict is in Lebanon as well where Iran supports the resistance group Hezbullah. Israeli claims that Iran wants to arm both Lebanon and Syria with a ‘massive military presence’ on the Israeli borders.  Notwithstanding the fact that Israeli strikes inside Lebanon and Syria airspaces is an open fiefdom of Israel, owing to its much superior air force capabilities.

Iran has retorted back  that in case Israel is to strike on Iran, then the cities of Israel like Tel Aviv, Haifa and Israel Dimona nuclear sites would be reduced to a  rubble. The news according to The Times of Israel 3 on December 27, says that , Iran’s ‘Revolutionary Guards missile units would hit targets in Israel ‘within 7 minutes of an attack,’ then follow up with 2nd wave of rockets, according to state television video. The video was put on air on Iran’s state-controlled IRIB TV2 on December 17. Israeli war experts are engaged into warning Israel to not to take-on any such misadventure, but what is to unfold is for the time to find out. 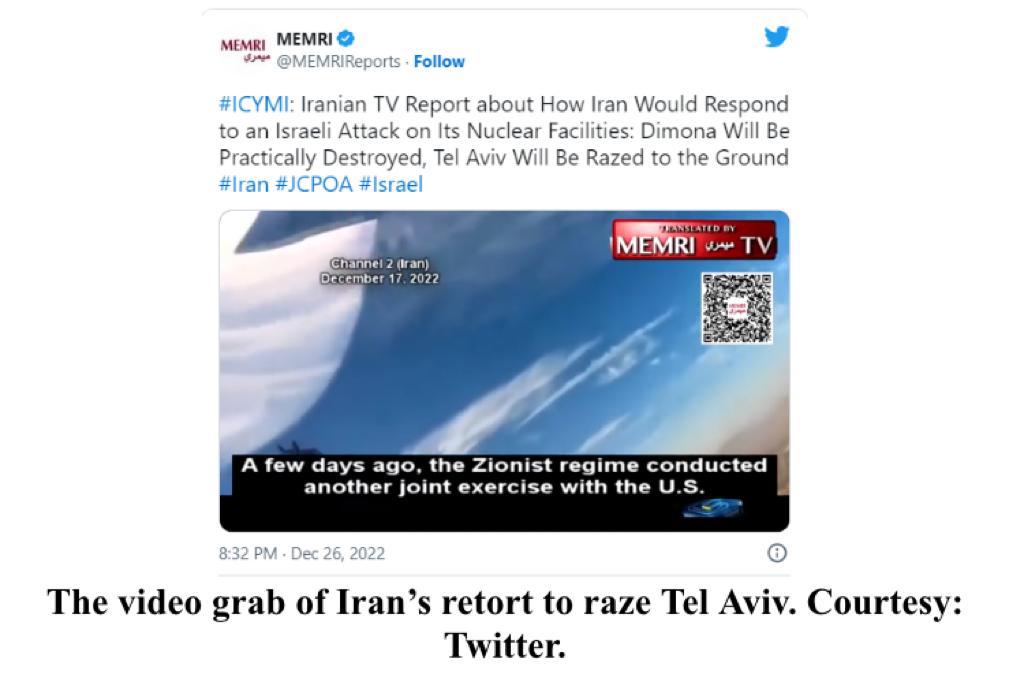 Israel is now set to have a new government under Benjamin Netanyahu and its new Defense Minister Yoav Gallant and both have an itching-palm for a war against Iran. There are now new analysis afoot in Israeli media, that Israel in 2010 had speculated over strikes on, but that was to have been considered as ‘jumping-the-gun’, as Iran’s nuclear programme was is in infancy. Now Israel might get to redo what it had planned a decade back, reported The Jerusalem Post 4. The big question is, if US wants to shift the war theatre from Russia-Ukraine and bring it into the Gulf? Speculations are rife as now the FIFA world cup is also over.

The US preparations to take on its worst foe Iran, which is also an equal anathema to Israel, are also in place as US had long conducted a I2U2 group, thrusting Israel-India-United Arab Emirates-US together as a conglomerate stitched together against Iran. The Indian options are surely to lie with the group as Israel is the second largest arms supplier to India and UAE is home to millions of Indians from where remittances worth billions of USD  reach home annually, but, the stumbling block  in this whole melee is Russia, whose relations with Israel are ‘sour at worst’ as Israel has supported Ukraine against it.

There are war signs between North Korea and South Korea, China and US over Taiwan, China and India in the Himalayas, and now with a bated breath, the world is watching the Israel-Iran saber-rattling which might trigger a new war, which of course, will have the potential to thrust the world into a third-world-war. In this new post COVID-19 scenario. Let’s see what is to happen next.