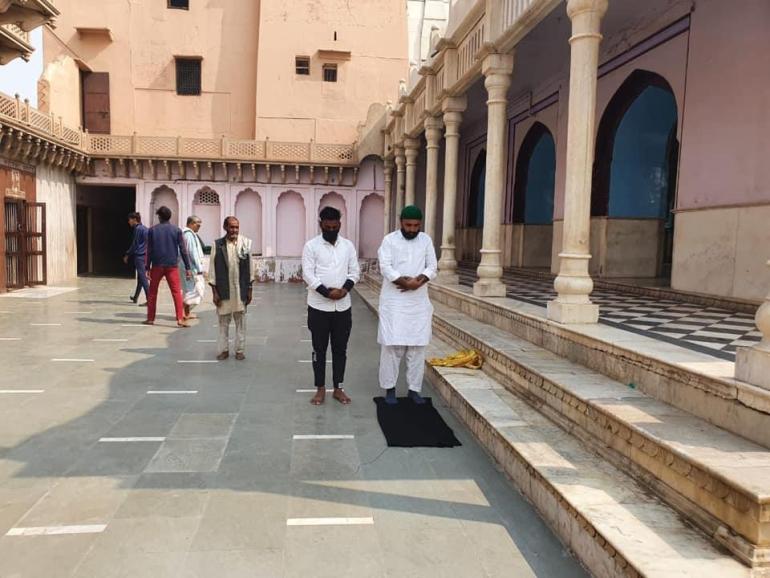 New Delhi: Gandhian social activist and National convenor of Khudai Khidmatgar organisation, Faisal Khan, who was arrested by Uttar Pradesh Police from New Delhi on Monday had performed ‘Namaz’ along with his colleague Chand Mohammad only after people in the the temple offered them to do so, Khudai Khimatgar officials said.

The organisation’s spokesperson Pawan Yadav told Muslim Mirror that people associated with Mathura’s Nand Baba Temple might be “under pressure” that they are denying the fact that Khan and Mohammad were granted permission for offering Namaz.

Khan was sent to 14-day judicial custody on Tuesday, reported ANI. He was booked by the UP police on a complaint filed by a priest at the temple, Krishna Goswami aka Kanha.

What happened at the temple?

Khan was on a five-day pilgrimage (Yatra), from October 24 to 29 October 2020, to the holy land of Krishna, Braja along with other associates Chand Mohammad, Nilesh Gupta and Sagar Ratna, a release issued by Khudai Khidmatgar’s spokesperson Pawan Yadav said.

Khan was participating in the ancient Chaurasi Kosi Yatra of Govardhan. In his Yatra he met with several peoples as well as the priest of various temples.

Nilesh Gupta said on the last day of the pilgrimage, they visited the holy temple of “Nand Baba”.

He paid his obeisance there. That was the time of his afternoon prayers, so he asked for a suitable place. The people who were there in the temple allowed him to offer prayers in the temple compound itself by saying that you are already in the home of God so why do you need to go anywhere else. Hearing it, Faisal Khan completed his prayers. After it, he and other members stayed in the Temple for some more time and they had their lunch in the same temple, Gupta added.

“Everything was fine. On October 29 the Yatra was completed and he returned to Delhi with all. After 3 days he got the information from some local media people that there are some people who are not happy with the incidents, which took place on 29th October and they are going to complain with the police, “he added.

Pawan Yadav said that in the viral videos and photos, several people are seen standing around Khan and Mohammad while they were offering Namaz. The presence of people at the site indicates that they had no objection to Namaz being offered in the temple at the time or they could have stopped them from doing so.

“It is impossible to offer Namaz in a temple in presence of so many people without priests’ permission,” he added.

The following video shows Khan’s conversation with people in the temple including a priests. The man in the red Kurta is the priest identified as Krishna Goswami aka Kanha. He is clearly seen offering Khan to have lunch with him. It is worth mentioning that this is the same priest who has filed a police complaint against Khan and his colleagues.

The FIR states that Khan and Chand offered namaz “without taking permission from temple authorities” or informing them.

“Their act has hurt the sentiments of the Hindu community…We have a concern that these photographs do not get misused or if there is any foreign funding behind this incident. This should also be probed if this act intended to stir communal tensions,” read the FIR.

In the statement, ‘Khudai Khidmatgar’ said it strongly opposes all the allegations which are put on Faisal Khan, his associates Chand Mohammad, Nilesh Gupta and Sagar Ratna. It also deplored that some news channels run false stories about the incident.

It further said Khudai Khidmatgar believes in Peace, Love and Communal Harmony, Faisal Khan as an individual is working from the last three decades on these issues and the objective of Khudai Khidmatgar is also the same.

“We focus to counter any forms of religious extremism in this society. Many Hindu religious institutions have appreciated and acknowledged the work of Faisal khan for his uncompromised work for peace and brotherhood”.

“In the end we also want to say that if anybody individual or organization feels that we have hurt their sentiments then we are sorry for that but still want to add it was never our intention” read the statement.

Khudai Khidmatgar, a Gandhian organization, was established by Khan Abdul Gaffar Khan who was also known as the frontier Gandhi or Sarhadi Gandhi.