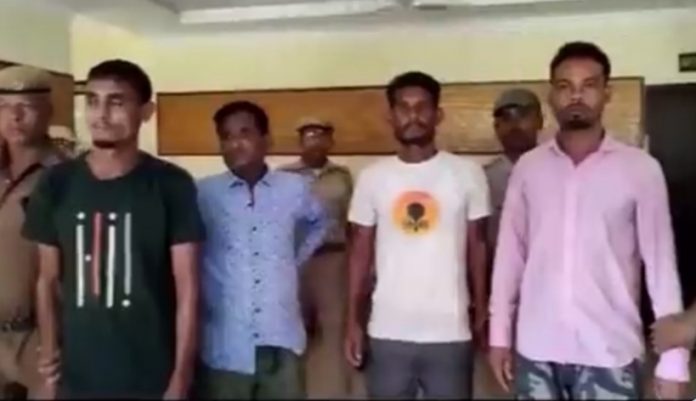 Guwahati – So far five Muslims have been arrested for waging ‘Flood Jihad’ that caused heavy floods in the Hindu majority areas of Silchar. The arrests were made around July 3 and after keeping the Muslim men behind bars for 15 days but were let out for lack of any evidence.

These arrests were made of the Muslims living in the Muslim-dominated Bethukandi, an area in Silchar but police found no evidence against them to link with any ‘Flood Jihad’ theory.

Assam witnessed two waves of flood first in May and then in June this year as rains came early and were heavier than usual. But it brought in its wake wanton death and destruction which is normal and happens each year.

However, this year there was a new twist in the Assam floods. This is because social media this year went hammer and tongs with the theory ‘Flood Jihad’ and blamed Muslims for the floods.

The social media posts coined the term ‘Flood Jihad’ and circulated in droves. The social media posts were shared thousands of times and then repeated by some local media outlets. The message was floods were the handiwork of a group of Muslims who had deliberately inundated the Hindu-majority city of Silchar.

According to Google Trends, searches for “flood jihad” hit a five-year peak in July, fed by the social media frenzy around this claim that Muslims were responsible for damaging embankments meant to protect against flooding.

The truth about this year’s flood in Assam is poor maintenance of embankments that is central to flood management.  The state has more than 4,000km (2,500 miles) of embankments; many of them have become old and prone to damage. There a lot of breaches do take place because of the lack of repair and maintenance of the embankments. Sometimes there are instances where people deliberately breached the embankment so that the water would move out, and would not flood their area.

Silchar Superintendent of police, Ramandeep Kaur, rubbished the claim of ‘Flood Jihad.’ She told the media that some arrests were made due to social media posts but all such people were released as nothing wrong was found against them.

Locals feel that the problem of floods in Assam requires a far more mature response from the double-engine government right now in the state and the center.

However, neither the BJP-ruled state government nor the central government is bothered for finding any long-lasting solution for controlling the floods in Assam.

Such theories like “flood jihad” is floated only to divert the people’s attention from the long-standing problem and this is an easy route taken to exit from the problem that’s festering for years.