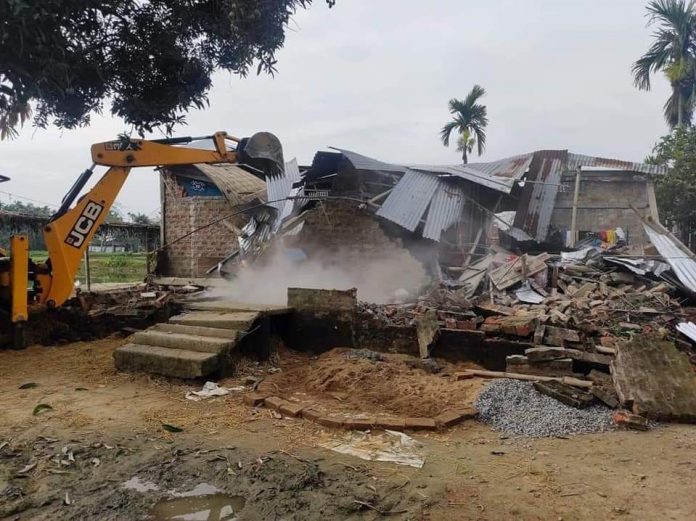 Authorities bulldozed homes of five families in Assam’s Nagaon on Sunday after a police station was partially set on fire following the death of a fish-seller identified as Safikul Islam.

A mob of about 40 people from Salonabari village had set fire to a part of the Batadrava police station in Dhing circle Saturday afternoon, The Indian Express (TIE) reported . After the incident, the police arrested several accused and homes belonging to five of them were bulldozed on Sunday mooring.

Assam special DGP (law and order) GP Singh claimed that the homes that were demolished belonged to “illegal settlers”.

Custodial death is crime. Mob setting fire in Police Station is crime. Police bulldozing the houses of the accused without any due process of law is crime. Period.

The entire episode started with death of Islam. He was brought to the atadrava police station on the basis of a complaint that he was “drunk.” His family members claimed, as reported by TIE, that the police at the Batadrava station demanded Rs 10,000 and a duck as a bribe for his release. According to a 25-year-old resident of the village, Islam’s wife and niece visited the police station with a duck on Friday night, but were asked to “arrange” for money by the police. “When they returned, the next morning, they found that he was unwell and accompanied him to the dispensary nearby. The case was referred to the civil hospital but he died on the way,” said the resident.

Reacting to bulldozing of houses, Congress MLA Abdul Khaleque said in a tweet, “We never support attack on police station . But buldozing houses of attackers by police is direct violation of human rights.” The developments were condemned by AIUDF MLAs as well.