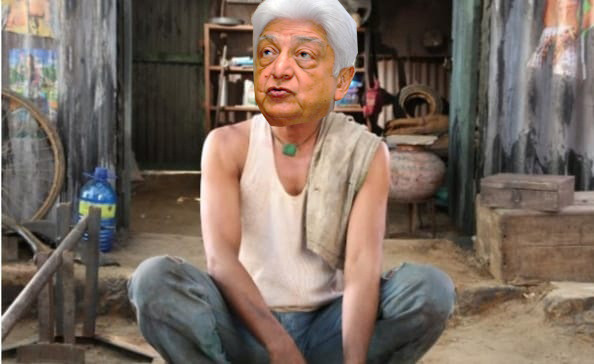 A man is known by his company, a citizen by his community. The concept of individualism exits in the air; it is ideal to the West, surreal to the East. If someone utters the word, Panchar Putra, in a flight Azim Premji is travelling in, the Wipro chairman will move towards him automatically.

The word, ‘Panchar Putra’ has become identical to the Muslim community in India: the saffron zealots use it to overcome ‘perpetual mental slavery of Muslim-rule’; the others denote it due to socio-economic deprivation of the community. But for me the 20 plus crore Muslims should take up the derogatory term as a challenge and strive hard to prove both the sections wrong by looking for avenues of empowerment. Obviously, the term doesn’t emerge overnight, it has a history, it has a politics.

In the post-independent India, the Muslim community was, for some obvious reasons, forced to live a life without dignity, and in abject poverty as reflected in various reports, including the precisely documented Sachar Committee Report.

As a policy matter, the Congress deprives Muslims from bread and butter; the BJP forces them to live without dignity. Of late, the BJP has started pushing the Guru Golwalkar proposition of making Muslim second class citizen even harder. Golwalkar writes: “We or our nationhood defined that non-Hindus should live in India glorifying the Hindu nation, without equal rights, as second class citizens.”

In its 60 years rule, the Congress empowered some Muslims symbolically in order to keep its statement of ‘secularism’ correct. The Congress ‘adopted’ few Muslim families who were often found walking in the corridors of power. The members of the few families were given all ceremonial positions. They sat on the highest constitutional positions becoming presidents, vice presidents, governors, besides being chief ministers and cabinet ministers  etc. Some also became chief justices of India and even chief of Intelligence Bureau. But empowerment of a few families, cannot be taken as empowerment of the entire community.

In recent past, a Muslim politician close to Gandhi family, who was called ‘Chanakya’, failed to ensure protection of former Congress party MP Ehsan Jafri when a rampaging Hindutva crowd gathered outside his during 2002 Gujarat riot. However, Jafri’s gruesome killing tells us a lot.

The status of an individual doesn’t matter. It can be understood from the example of Sikh, Parsi and Jain communities. They are negligible in terms of population but are socially and economically empowered. Can the Hindu zealots dare to lynch any member of the aforementioned communities with impunity as they did with Ekhlaq or Junaid?

Even a highly privileged individual doesn’t command respect beyond his jurisdiction. It is futile to have billionaires, super stars, presidents, cabinet ministers and chief justice  amongst us if common Muslims run the risk of being lynched, racially abused on a daily basis. Similarly, there is little solace to have superstars and billionaires or have people sitting on top constitutional positions.

Recently, the death of Mohammad Shahabuddin, four-tim’e MP from Siwan, due to coronavirus triggered tantrum among the Muslim community with many accusing the present  ruling dispensation of meeting out unequal treatment to the RJD leader. Chhota Rajan, a gangster who too was infected with the novel virus in Tihar Jail, was sent to India’s premier hospital AIIMS for the treatment but Shahabuddin breathed his last at an unknown government hospital in the national capital.

Muslims must learn from Sikh and Marwadi communities how they get organized and help their community members without the support of government .

Few years back a Muslim bureaucrat who worked with four prime ministers told me in Patna that once on a visit in Bangalore he tried to approach Wipro Chairman Azim Hashim Premji to discuss the educational backwardness of Muslims in Bihar. He was informed that Premji doesn’t like to discuss anything about ‘Muslim’ community.

Muslims like Premji should know that if anyone calls the word ‘Panchar Putra’ in a flight he is travelling in, he will definitely turn to look at the face of the caller. Does he not belong to the Panchar Putra’ community?

One  should not forget that Jews bankers and VVIPs were also thrown in concentration camps in Nazi’s Germany. It’s just a matter of time. Today its Pehlu Khan tomorrow might be Salman Khan.

Wipro will continue to invest in Telangana: Azim Premji