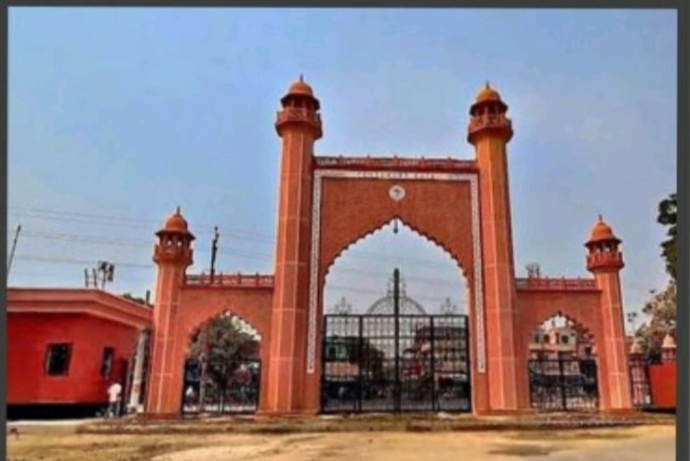 Sir Syed Ahmad Taqvi bin Syed Mohammad Muttaqi, the Knight Commander of the Star of India (KCSI) ; Jawad-ud-Daula; Arif-e-Jung; and a historian with a deep insight into the social dynamics- A man of Vision, courage and valor, a scientist and a revivalist. A journey of sweat and tears- 8th January 1877, the foundation stone, the Muhammadan Anglo-Oriental College, the Aligarh Muslim University, a World, a Universal seat of Learning!
Sir Syed was the brightest star on the horizon of 19th century social reformers- neither an old-farrant, nor Macaulay and unlike Maulana Azad, but like a Bismarck, lost in the pleasures of life, who then realized that he was destined for something to be different, to shape the history of the Indian Muslims and to uplift them from the depths of despondency to the light of hope and modernity.

Sir Syed Ahmed Khan realised the fact that all means of liberation from orthodoxy lay in modernization and advancements through the scientific knowledge and technological possessions. During his inspiring visit to the Oxford University, he further realised that most of the science and technology is embedded in English language- the lingua franca of the world. Hence, he established the Muhammadan Anglo-Oriental College with two schools in 1875 to a College in 1877, which later in 1920 raised to the status of this abode of intelligence, experience and expertise- known as the Aligarh Muslim University (A.M.U.), a world unto it’s being, a plethora of dreams and opportunities! A visionary step to build the very foundational aura and spirit of the Aligarh Muslim University – a journey of milestones adhering to the indigenous tradition of faith and culture to recreate the “Oxford of the East” at Aligarh, which are the epitome of spirit and purpose to harness National pride and prestige.

With an everlasting Dream to Enlighten his society out of the glooms, he commissioned buildings with efforts for Quality Education, to help the overall personality of the “Nightingales” of this Chaman-e Sir Syed. The most popular and historical places of the University include The Bab-e-Syed-the University Gate, the Students’ Union Hall, The Jama Masjid, Sir Syed Hall, Maulana Azad Library, The Strachey Hall, The Musa Dakri Museum and The Sir Syed House.

Bab-e Syed- The University Gate. The main entrance to the Aligarh Muslim University Campus, the gateway to this prestigious Diyaar-e- Sir Syed, is the Bab-e-Syed Gate. This is the entryway to a whole world of opportunities to showcase the talents and genius of the individuals, to take them to new heights of success. It is the starting point of the AMU campus which has further building constructions having different stories behind their establishment. 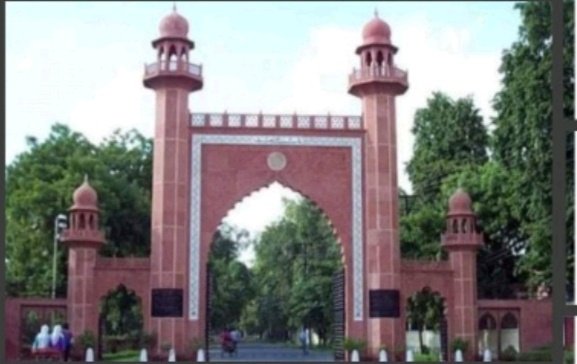 The Centenary Gate Inauguration
Just as the very grandeur of the Mughal buildings is oppressive to Europe that has its monuments of Sun-kings, its Louvres and its Versailles and just as the later Mughal paintings are a harmonious blend of Persian and Indian artistic tradition, so is the Indo-Muslim architecture of Delhi. It is said that the columns of twenty-seven Hindu and Jaina temples were utilized in the great Quwwat-ul-Islam Mosque, at Delhi, rightly called the “Might of Islam”, started by Qutb-al-Din Aybak on an ancient pre-Muslim plinth.

Taking Inspiration from the Great Screen of the Mosque, an arched facade embellished with carvings of floral devices in the Qutb complex in Delhi, the dual gateways of the campus- the Bab-e-Syed and the Centenary Gate of the Aligarh Muslim University, bear unmistakable evidence that they are not merely compilations, but the distinctive, planned works of the professional architects.

On October 17, 2020, A.M.U. reached yet another milestone of it’s rich architectural history as the University inaugurated yet another landmark building- the Centenary Gate by His Holiness-Syedna Mufaddal Saifuddin, the Chancellor of AMU. The gate is the open sesame to a plethora of opportunities. It’s an entrance to a place where students hone up their skills into a surfeit of talent and merit, projecting it’s true essence as a Replica of the Bab-e-Syed Gate.

Starting January 2020, completed in a short length of time and adjusting to the lockdown months owing to the Pandemic, this splendid gateway of A.M.U., the Cultural amalgam of Taaleem, Tehzeeb and Tarbiyat in this abode of learning spans 69′(feet) in width, comprising a colossal Central Gate of 22′, flanked by 2 side gates of 11′ each. Taking inspiration from the famous ‘jaali'(net) design of the Indo-Islamic architecture, with intricate latticed screens having an ornamental pattern of carvings, the minarets and arches rising high, the Centenary Gate touches a maximum height of 56.5′ of which 30’ is open for passage.

Keeping it’s security factor to natural disasters, it’s an earthquake resistant elevation of Red stone clad structure with reinforced concrete or ferroconcrete. It’s facade is highlighted by white marble stone and an inlay of coloured stones. Definitely not an overnight miracle but days and months of mind and muscle have gone by to erect this majestic centenary gate, beautifully crafted with brick, mortar, concrete and red stone.

Aligarh Muslim University is the place where budding students nurture themselves to follow the dreams of their limitless potentials, to live a life in all its sheen and glory, with the culture of Aligarh; the culture of boldness and audacity to speak the truth, to become the leaders of tomorrow. With addition of this colossal gateway to the rich architectural history, lies the everlasting impression about the passion and philanthropy of the Man, a Visionary Educationist who lives beyond the ages of his time. The man whose Mission of Education and Scientific Vision is not only Socially Alive but also, Practically Emphatic!

The author is a final year Masters student of English Literature in the Department of English, Aligarh Muslim University.